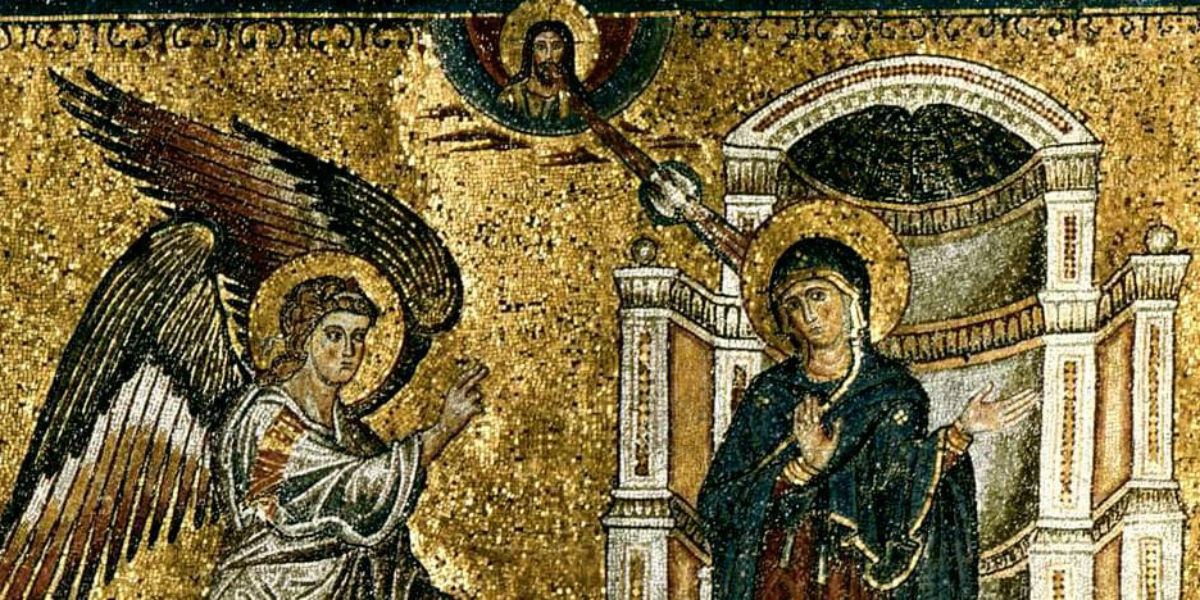 The biblical term “mystery” refers to a long thread running through history, hidden under ordinary faces and events.  It comes to a climax in an Angel’s annunciation to a Virgin that puts together many biblical concepts -king, messiah, emmanuel, son of God – for the fourth Sunday of Advent.

My friend was a fundamentalist who had more than a bit of antipathy towards the Catholic Church, charging that it added to the simple faith of the Bible.

But he didn’t read his bible very well. The word “mystery” is a Catholic word only because it is a biblical word. Paul speaks of the mystery hidden for many ages but now manifested (Romans 16:25-26).

Mystery means something very specific in this context. It’s not exactly about a thrilling novel with a surprise ending, but it’s actually close. Mystery is about a plan that God is working through the course of everyday human events. People falling in love and getting married. Kids being born, growing up and themselves having kids. One nation warring against another.

All these things you can see. But there is a hidden purpose of God that is being accomplished underneath it all and through it all. This you can’t quite see. And most importantly, you can’t quite see where it is all going.  The focus of the Season of Advent is to contemplate the unfolding of the mystery, and to marvel on how all the threads of salvation history converge on a single person born in Bethlehem.

For a long while Israel had no king but God. Then, humiliated by defeat at the hands of the Philistines, they cried out for a warrior king. They got a bad one in Saul. But then came David, a man after God’s own heart. He danced before the Ark of the Covenant, slew Goliath, and built Israel into an empire. But he was not allowed to build God a house. Instead, God promised to build him a house, which is to say, a dynasty. This dynasty was to have no end, in fact (2 Sam. 7:8-16).

Centuries later, it appeared that God’s promise had failed. The last Davidic king was dragged off to captivity in Babylon and the throne was vacant for 500 years.

Annunciation of a Messiah who Will Rule Forever

Just when hope seemed to be lost, the Angel Gabriel was sent to a Virgin betrothed to a man named Joseph, of the very tribe of David (Luke 1:26-38). She is given shocking news–she is to become the mother of the messiah, which to any Jew of the time meant the anointed king of Judah, the successor of David. To be called “Son of the Most High” was nothing new for the Davidic King. This was one of his traditional titles. But Gabriel says that his reign will be without end. Now this is not traditional–kings, like everyone else, die. How could he rule forever and ever?

But that question paled in comparison with the one that burned in Mary’s heart and made its way out of her mouth: how can this be since I’ve never been intimate with a man?

Gabriel’s response to this question was even more difficult to believe than what he’d previously said. It seems that this child would be brought into this world without the help of a biological father. Mary would conceive by the power of the Holy Spirit so that the title “Son of God” traditionally given to the king of Judah would take on an entirely new meaning.

So THIS is what God had been up to all along. THIS had been what all the patriarchs, prophets, and kings had been preparing for. The mystery is coming to a climax.

The title “Emmanuel,” God-with-us, that had been given to an earlier king, is going to take on an unheard-of meaning. God was about to be born in human flesh. He was coming as king to do what kings had always done in Israel–save God’s people by vanquishing their enemies. But the mortal foe to be beaten was mortality itself. This is how he would reign forever–and how we’d be able to reign forever with him.

That final battle and ultimate victory would have to wait a few years though. The wood of the cross must be preceded by the wood of the manger. In the Mystery of God’s plan of salvation, all, including the advent of the savior, must happen in its proper time.

This post on Advent, the annunciation and the mystery of the incarnation is a reflection on the readings for the fourth Sunday of Advent, cycle B — 2 Samuel 7: 1-16; Romans 16:25-27; and Luke 1:26-38 (the Annunciation).  It is also a fitting mediation for the Solemnity of the Annunciation on March 25.  In this moment of Gabriel’s encounter with Mary and the conception of the Lord,  many biblical concepts converge – king, messiah, Emmanuel, son of God.