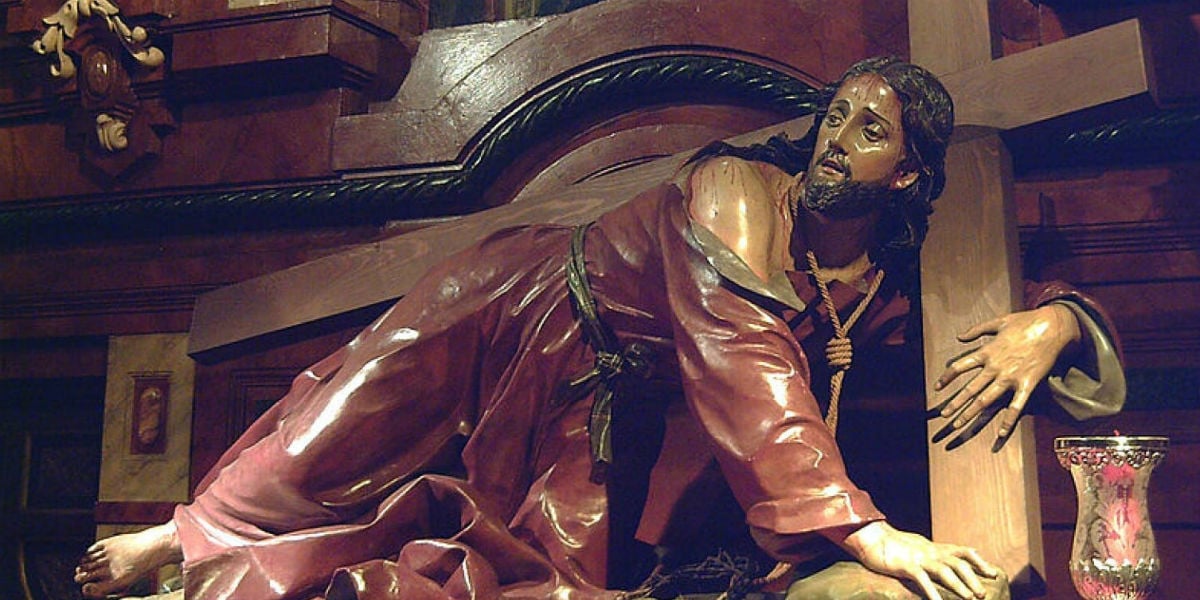 Palm Sunday – Obsessed With the Passion of Christ?

This post on the passion of Jesus was originally written as a commentary on the scripture readings for Palm Sunday but makes for a great read anytime during the Lenten Season, especially Holy Week.   The suffering and death of  Christ reveals the depths of sin and the intensity of divine love.

Catholics seem preoccupied with the sufferings of Christ. The Crucifix, the sorrowful Mysteries, the Stations of the Cross, and even Mel Gibson’s movie “The Passion of the Christ.” As if all this were not enough, Catholics must stand at attention one Sunday each year as they listen to the entire passion narrative read aloud.

Careful, repeated meditation on the Passion of Christ is important because the Passion is the climax of the entire history of Revelation and Redemption. It the ultimate Revelation of two intertwined realities: human sin and divine love.

The Passion as a Revelation of Sin

First let’s talk about sin. People often think of sin merely as a transgression of God’s arbitrary law, as a blot on our heavenly driving record. Meditation on the Passion makes us know better. Sin not only alienates us from God, it weakens us, corrupts us debases us, enslaves us. The fickle crowd that carpets his way into Jerusalem with palms drives him out with a cross on his back. One of his own betrays him to his enemies, another denies him. The Roman soldiers, to whom he did no wrong and was no threat, took diabolical pleasure in brutalizing him.

Hard to believe that human beings are capable of such cruelty? Auschwitz shows us that such evil really does lurk in the hearts of men.

Then there is Pilate, who seems to be a much more reasonable figure. Maybe more like us. He just wants to keep the peace, preserve his relationship with the Jewish leaders and the Emperor. If it means allowing an innocent man to be tortured to death – well, it’s regrettable, but that’s the price of living in the real world.

Ultimately, Pilate’s sin is an act of cowardice. Remember, sin is not just commission but omission. It involves what we do and what we fail to do, as we say in the Confiteor.

But, you say, it had to be so. God planned it this way. It was all predicted in the Scriptures.

Yes, but God’s foreknowledge does not mean he predetermined it. All the actors in the drama were free and responsible. Their sins are our sins. Indeed, they represent all of us, Jew and Gentile, male and female, black, white and yellow. That’s why Mel Gibson made an appearance in the Passion of the Christ – it was his hands that held down Jesus’s hands as they were nailed to the cross.

His Suffering – a Revelation of Love

But the story of the passion is even more importantly a revelation of who God is. The First Letter of John 4:8 says God is love. The passion shows us what love means. Love cannot sit idly by in the face of suffering. It instead leaves comfort behind and risks itself to mount a rescue mission. Love, therefore, must first empty Himself of glory at the Fathers right hand, and take the form of a slave (Phil 2:6-11). From the splendor of heavenly glory to the squalor of a stinking stable.

As if that were not enough, Love surrenders himself into the hands of those who torture him to death. He saw their torches coming in the valley as he prayed on the hillside in the Garden. He could have walked over the mountain in the Judean wilderness and disappeared without a trace. Or he could have used his divine power at any moment to scatter the Temple Guard and the Romans. Till the very end, he could have come down from that cross, as the crowd taunted him to do.

His Passion – The Supreme Sacrifice

But that’s just it. He had to love till the very end (John 13:1). Love to the max. The fullness of love in a human heart means a love that was absolutely unstoppable by anything that hell and fallen humanity could hurl against it. And no love, no commitment is total unless it entails the supreme sacrifice of one’s life.

That’s what was necessary to redeem us out of slavery to evil, to get us out of Egypt and through the Red Sea, across the Jordan, and into the Promised Land. It was for our freedom that he died; let’s not again willingly submit ourselves to the bondage of sin.

This meditation on the suffering of Jesus Christ as a revelation of both the depth of sin and the intensity of divine love is offered as a commentary on the biblical readings for the Palm or Passion Sunday, liturgical cycle C (Luke 19:28-40, Isaiah 50:4-7; Psalm 22; Philippians 2:6-11; Lukan passion Narrative, Luke 22:14-23:56).