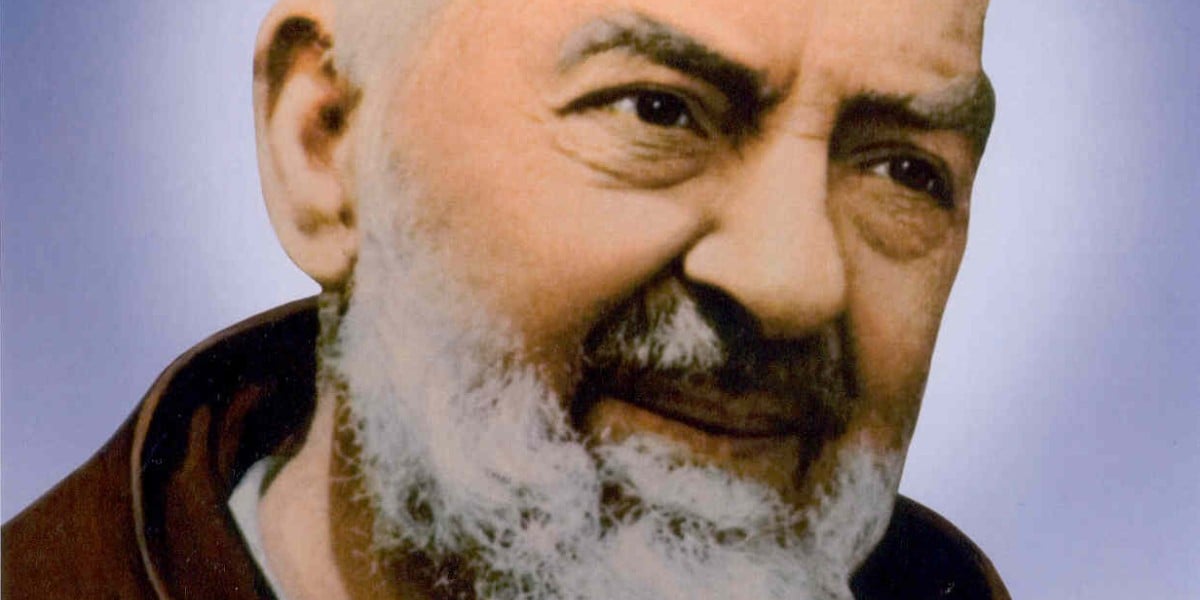 Padre Pio Highlights of His Life

Padre Pio.  Anyone, religious or not, who grew up in Italy during the twentieth century, can’t help but know his name.  The humble and often sickly Franciscan friar who began his life in one obscure mountain town and died in another, had enormous influence in his lifetime, not only in Italy, but around the world.

I was a Catholic altar boy in America during the final years of his life.  At that time, I hadn’t heard of him.  As puberty approached, I was much more interested in rock musicians than Italian Franciscan friars.  But at age 16, I rediscovered Jesus and was carried away by the joy and power of the Holy Spirit.  I began to read the bible and any other spiritual books I could get my hand on.  The first thing I came across was a life of Padre Pio who had died just a few years earlier.  I raced through the book, reading about the miracles worked, even in his lifetime, through the intercession of this humble man.  His devotion to Christ’s passion was so great that Jesus allowed him a special share in it, bestowing upon him the stigmata, the wounds Jesus’ himself experienced in his side, hands and feet.  Padre Pio deferred first and foremost to Christ, of course.  But he also deferred to someone he called his holy father, Francis.  I had heard of St. Francis of Assisi before this.  Or rather I saw statues of him in gardens with birds perched on his shoulder.  But Padre Pio made me want to know more about this figure who was such an inspiration.  So my next book was The Little Flowers of St. Francis which thrilled me as Padre Pio’s life had done.

Later in life, I found out that Padre Pio’s birthplace, his “paese,” was in the same province in Italy as my grandfather’s hometown.  So last time my wife and I were visiting relatives in the mountains of Campania, we made the forty five minute drive to visit the humble home where the saint was born, and the town church where he often celebrated mass.  We were deeply moved once by the humility, simplicity, and faith of this humble servant of God.

Each year, on September 23, the church remembers this hero who teaches us so much of the value of suffering and the power of faith.

22 January 1903. Took the Habit of the Order of Friars Minor Capuchin (age 15), entering the novitiate and taking the name Pio. Until priestly ordination he would be called Fra. (Fratello/Brother) Pio.

22 January 1904. Made his First Profession of the Evangelical Counsels of Poverty, Chastity and Obedience.

1907. After three years of temporary profession he pronounced his final vows.

10 August 1910. Ordained to the priesthood in the chapel of the Archbishop of Benevento.

September 1910. Received the Stigmata visibly for a short time. He begged God to take them away. He confided it only to his spiritual director.

November 1911. Supernatural phenomenon came to the attention of his superiors when he was observed in ecstasy.

5-7 August 1918. Transverberation of the heart (the phenomenon of the wounding of the heart indicating the union of love with God).

20 September 1918. Received the Visible Stigmata, which would last for 50 years, while praying after Mass in the choir loft of the (old) Church of Our Lady of Grace, next to the Friary

1919. Rumors that the Church would transfer the local saint began to agitate the populace of San Giovanni Rotondo

2 June 1922. Orders of the Holy Office (today the Congregation for the Doctrine of the Faith) began to restrict the public’s access to Padre Pio.

1925   Padre Pio converts an old room in the friary into a medical clinic.

9 June 1931 (Feast of Corpus Christi). Padre Pio ordered by the Holy See to desist from all activities except the celebration of the Mass, which was to be in private.

Early 1933. Pope Pius XI orders the Holy Office to reverse its ban on the public celebration of Mass, saying “I have not been badly disposed toward Padre Pio, but I have been badly informed.”

26 September 1968. Buried in the crypt prepared for him in the Church of Our Lady of Grace.

2008  Body of Padre Pio exhumed and found to be incorrupt.

For a 7 minute PODCAST on Padre Pio, CLICK HERE.

Be a part of the “new springtime” of evangelization!  Your tax-deductible gift helps us use TV, radio, and the web to proclaim the message without compromise but in language even the young can understand.  Click here to donate now.