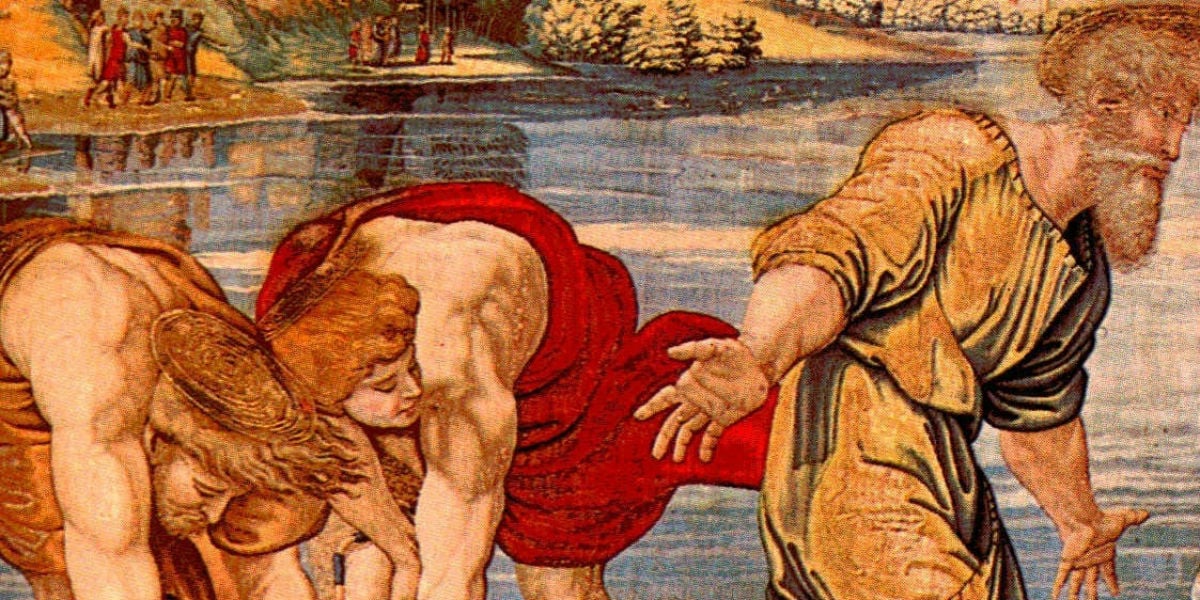 The Sons of Zebedee – Ambition vs. Servant Leadership 29th Sunday B

Brothers John and James, the sons of Zebedee, had ambition. When they make their famous request for places of honor & privilege in Mark’s gospel, Jesus takes the opportunity to teach them that leadership & true greatness consists in loving and serving, even to the point of sharing with Christ the cup of suffering.  For the 29th Sunday in Ordinary Time, liturgical cycle B

It was time to make their move. Usually it was Peter who took the initiative, but now it was their turn. The brothers cleared their throats and asked the master for the best seats in the house, the privileged places of honor right next to the throne.

Of course, in this conversation, recounted in the gospel of Mark, John and James were referring to that glorious moment when Jesus would be finally acclaimed as king of Israel, indeed, of the entire world. These sons of Zebedee envisioned themselves as prime minister A and prime minister B who should naturally bask in the splendor of the monarch.

Jesus was quite restrained in his correction. For it would be natural for the disciples to strive for excellence since God created us to do so. And it would natural for them to think that excellence would mean privilege, honor and glory, for that is how everyone seemed to think of it, whether Jew or Gentile. Both chief priests and Roman governors were surrounded with pomp and circumstance, servants and sycophants.

Jesus wanted them to be ambitious, but for true greatness, which is not about big heads but big hearts. It is that love called charity that makes men and women truly great, since it makes them like God in whose image they were made. And Jesus had begun to show them what God’s love was like, but they’d not gotten the point. Their feet had not yet been washed and the King had not been crowned with thorns. They did not yet understood that love is self-emptying, that true greatness lies in sacrifice, that “prime minister” means “first servant,” indeed the servant of all.

Love & the Cup of Suffering

In a world where self-interest and self-promotion are the law of the land, such a love is destined to suffer. To be great in love is to suffer much. The cup of feasting may come, but only after the cup of suffering. Jesus had come to drain this bitter cup to its dregs. Were they ready to drink it with him? Glibly they answered yes, oblivious to the implications of their choice. They’d learn soon enough what it would entail.

Jesus, says the letter to the Hebrews, can be compassionate and merciful with us, because he was tempted in every way that we are tempted, though he never succumbed. He could correct the sons of Zebedee with gentleness because he himself was tempted to gain the favor and glory of the kingdoms of the world by bowing before the father of pride (Mathew 4:8-9). He chose instead humbly to serve the Father of mercy.

Sons of Zebedee – Tempted to Self-Promotion

You’d think it would be easier for us to get the point than the two sons of Zebedee. After all, we received the spirit of understanding when, in baptism and confirmation, we put on the mind of Christ. We know the end of the story–that the resurrection follows the crucifixion.

But unfortunately, there’s still a scar left on all us from the snake that bit our first parents, and a residue of the serpent’s venom still lingers. There is a tug within to climb over others in our rise to greatness, to exalt ourselves even at others expense, even to trip up others so that we may get ahead. We are tempted to let others take the rap so that we might look good, to leave others holding the bag while we escape, to leave the dirty dishes for others lest, God forbid, we do more than our “fair share.”

If we are to be followers of Jesus and be truly great, we must renounce placing any limits on how much we are willing to give or whom we are willing to serve. The one who is greatest, and is most like God, is not the one who appears on the cover of People magazine. It is the one who will go to the greatest lengths for those who are least worthy and least grateful.

This post focuses on the ambition for greatness of James & John, sons of Zebedee, shown in their requests for seats of honor next to Jesus.    It reflects upon the readings for the 29th Sunday in Ordinary Time, liturgical cycle B (Isaiah 53:10-11; Psalm 33; Hebrews 4:14-16; Mark 10:35-45) shows that to be first, we must be last, servants of all in love.