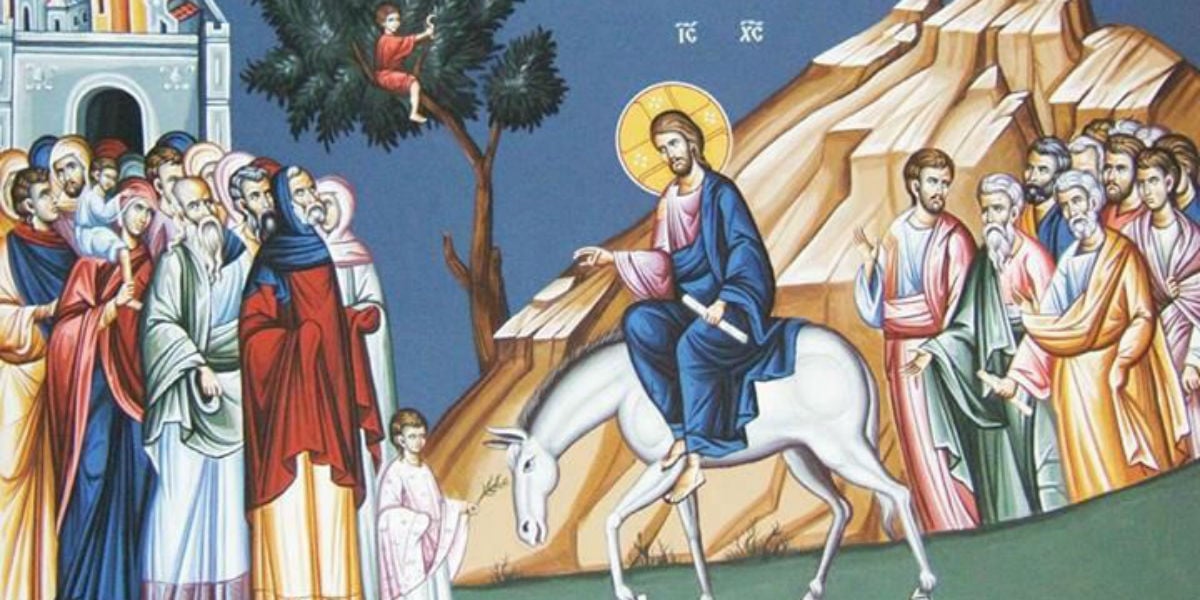 Rejoice at His Coming! – Andrew of Crete

Andrew of Crete comments on Jesus’ coming to Jerusalem on Palm Sunday to remind us of Christ’s continual coming and his final coming, calling us to receive his light and rejoice in his glory.

Let us say to Christ: Blessed is he who comes in the name of the Lord, the king of Israel. Let us hold before him like palm branches those final words inscribed above the cross. Let us show him honor, not with olive branches but with the splendor of merciful deeds to one another. Let us spread the thoughts and desires of our hearts under his feet like garments, so that entering us with the whole of his being, he may draw the whole of our being into himself and place the whole of his in us. Let us say to Zion in the words of the prophet: Have courage, daughter of Zion, do not be afraid. Behold, your king comes to you, humble and mounted on a colt, the foal of a beast of burden.

He is coming who is everywhere present and pervades all things; he is coming to achieve in you his work of universal salvation. He is coming who came to call to repentance not the righteous but sinners, coming to recall those who have strayed into sin. Do not be afraid, then: God is in the midst of you, and you shall not be shaken.

Receive him with open, outstretched hands, for it was on his own hands that he sketched you. Receive him who laid your foundations on the palms of his hands. Receive him, for he took upon himself all that belongs to us except sin, to consume what is ours in what is his. Be glad, city of Zion, our mother, and fear not. Celebrate your feasts. Glorify him for his mercy, who has come to us in you. Rejoice exceedingly, daughter of Jerusalem, sing and leap for joy. Be enlightened, be enlightened, we cry to you, as holy Isaiah trumpeted, for the light has come to you and the glory of the Lord has risen over you.

What kind of light is this? It is that which enlightens every man coming into the world. It is the everlasting light, the timeless light revealed in time, the light manifested in the flesh although hidden by nature, the light that shone round the shepherds and guided the Magi. It is the light that was in the world from the beginning, through which the world was made, yet the world did not know it. It is that light which came to its own, and its own people did not receive it.

And what is this glory of the Lord? Clearly it is the cross on which Christ was glorified, he, the radiance of the Father’s glory, even as he said when he faced his passion: Now is the Son of Man glorified, and God is glorified in him, and will glorify him at once. The glory of which he speaks here is his lifting up on the cross, for Christ’s glory is his cross and his exultation upon it, as he plainly says: When I have been lifted up, I will draw all men to myself.

This excerpt from a discourse by Saint Andrew of Crete on the coming of the light and glory of Christ (Orat. 9, in ramos palmarium: PG 97, 1002).  Though originally given on Palm Sunday as an exhortation to rejoice and receive Jesus the king, it is read in the Roman Office of Reading just before the start of season of Advent, on Tuesday of the 33rd week of the year as a commentary on Zechariah 9:1-10:2.

Banner/featured image Entry of Jesus Christ into Jerusalem by an unknown artist. Some rights reserved (used with permission).

St. Andrew of Crete (c. 660-740) was born around 660 AD in Damascus and eventually entered monastic life at Mar Saba. He later served at the Church of the Holy Sepulchre in Jerusalem, and was ordained a deacon at the great cathedral of Constantinople and mother Church of Eastern Christendom, Hagia Sophia, around 685. Always exhibiting great pastoral solicitude for orphans, widows, and the aged, Saint Andrew spent his last days as Archbishop of Gortyna on Crete, a position to which he was elevated in 692. Attrbuted by many with the invention of the canon as a style of religious writing, his works display not only great rhetorical skill, but an incomparable depth of theological understanding. He is considered one of the great spiritual writers on the theme of repentance, and his Great Canon, prayed during Lent in the Eastern Churches of Byzantine tradition, stands as a great testimony to man’s repentant cry to God, our merciful Father. Saint Andrew of Crete is numbered among those great Christian writers known as the Early Church Fathers or “Fathers of the Church.”