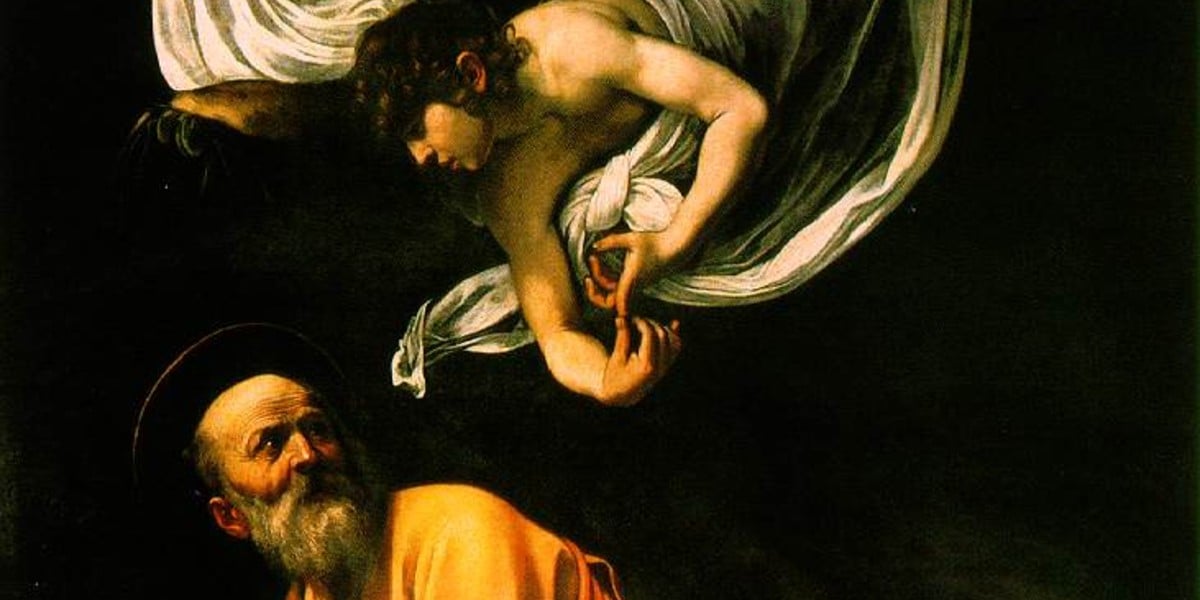 St. Bede the Venerable on the call of Matthew, tax collector turned apostle & evangelist.  Matthew, originally called Levi, was, as a publican, excommunicated from the synagogue and shunned in Jewish society. The fathers of the Church find a figure of the four evangelists in the four living creatures mentioned by both Ezekiel and Revelation.  Matthew is seen symbolized by the man, since he begins his gospel with the human genealogy of Jesus.

J esus saw a man called Matthew sitting at the tax office, and he said to him: Follow me [Matthew 9:9]. Jesus saw Matthew, not merely in the usual sense, but more significantly with his merciful understanding of men.

Through the Eyes of Mercy

He saw the tax collector and, because he saw him through the eyes of mercy and chose him, he said to him: Follow me. This following meant imitating the pattern of his life – not just walking after him. St. John tells us: Whoever says he abides in Christ ought to walk in the same way in which he walked [1 John 2:6].

And he rose and followed him. There is no reason for surprise that the tax collector abandoned earthly wealth as soon as the Lord commanded him. Nor should one be amazed that neglecting his wealth, he joined a band of men whose leader had, on Matthew’s assessment, no riches at all. Our Lord summoned Matthew by speaking to him in words. By an invisible, interior impulse flooding his mind with the light of grace, he instructed him to walk in his footsteps. In this way Matthew could understand that Christ, who was summoning him away from earthly possessions, had incorruptible treasures of heaven in his gift.

As he sat at table in the house, behold many tax collectors and sinners came and sat down with Jesus and his disciples. This conversion of one tax collector gave many men, those from his own profession and other sinners, an example of repentance and pardon. Notice also the happy and true anticipation of his future status as apostle and teacher of the nations. No sooner was he converted than Matthew drew after him a whole crowd of sinners along the same road to salvation. He took up his appointed duties while still taking his first steps in the faith, and from that hour he fulfilled his obligation and thus grew in merit.

Eating at the Banquet Table of Faith

To see a deeper understanding of the great celebration Matthew held at his house, we must realize that he not only gave a banquet for the Lord at his earthly residence, but far more pleasing was the banquet set in his own heart which he provided through faith and love. Our Savior attests to this: Behold I stand at the door and knock; if anyone hears my voice and opens the door, I will come in to him and eat with him, and he with me. [Rev 3:20]

On hearing Christ’s voice, we open the door to receive him, as it were, when we freely assent to his promptings and when we give ourselves over to doing what must be done. Christ, since he dwells in the hearts of his chosen ones through the grace of his love, enters so that he might eat with us and we with him. He ever refreshes us by the light of his presence insofar as we progress in our devotion to and longing for the things of heaven. He himself is delighted by such a pleasing banquet.

This post is an excerpt from a homily on the call of Saint Matthew, the Tax Collector, by Saint Bede the Venerable (Hom. 21: CCL 122, 149-151).  It appears in the Roman Catholic Office of Readings for the Feast of St. Matthew, apostle and evangelist on September 21.  St. Matthew’s has been honored on this day at least from the 8th century. St. Bede the Venerable was one of the earliest and most important Christian writers from Britain. This homily on the gospel story of St. Matthew publican turned apostle and evangelist (Matthew 9:9-13), was first given by St. Bede in the early 8th century.

For more on the apostles, read Dr. Italy’s post The Apostles: Who Were the Twelve?