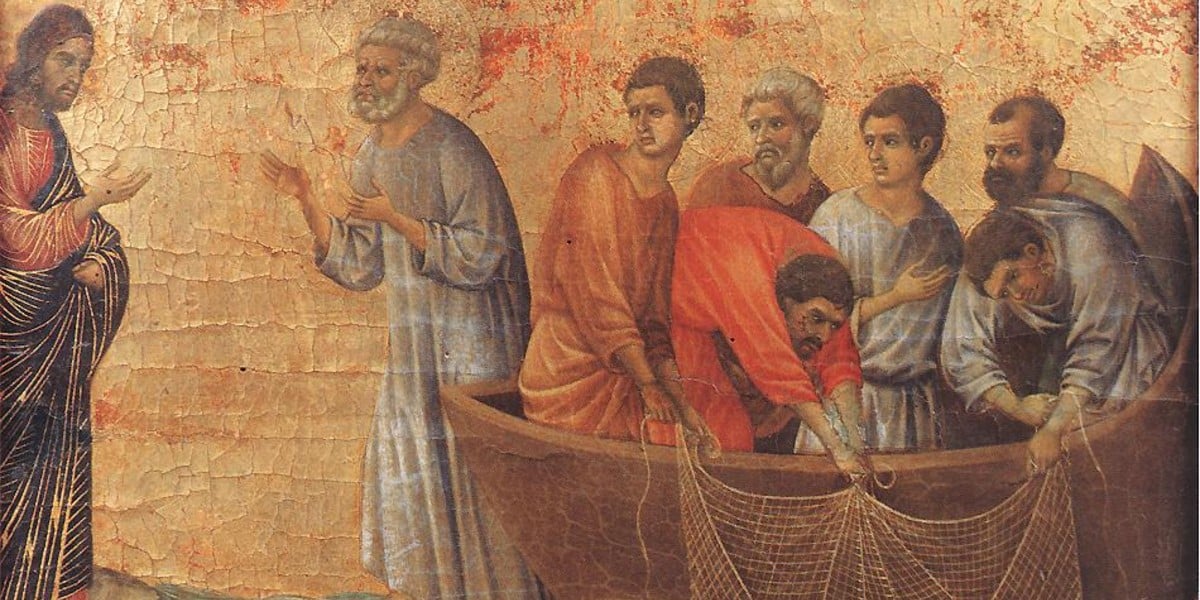 The Apostles – Who Were the Twelve?

The twelve apostles of Jesus of Nazareth — 12 fishermen and tax collectors who were selected from the disciples of the Lord Jesus Christ to be official eyewitnesses of his public ministry, death, and resurrection, priests of the new covenant, stewards of the mysteries of God.

Four were fishermen.  One was a tax collector.  We don’t know the occupations of the rest, but we can assume that they had plenty to do–business and family responsibilities absorbed them as they absorb us.

But when the prophet from Nazareth came walking along the shore, suddenly everything changed.  John and James, Peter and Andrew, two sets of brothers operating family businesses, were invited to follow him. They abruptly dropped their nets and abandoned their boats.  Matthew’s world changed from a band of sinful outcasts to an entirely different group of fledgling saints.

But this change, as hard as it might have been for them, was simply the call that every one of us receives, to become a true disciple.  For them, another call would follow, to be numbered among “the twelve.”

Did you ever wonder why the Lord named twelve apostles instead of some round number like ten?

Think back to the foundation of the people of Israel.  There were twelve tribes, traced back to twelve patriarchs, all sons of Jacob.  Jesus had come to found a new Israel, called the Church, and so chose twelve as the patriarchs of this new family.  When Jesus, after a time of prayer, set these twelve apart from the rest of his disciples, it was not because they were necessarily his very best students.  Based on the biblical record, I’d say that distinction falls to the Lord’s mother Mary followed by perhaps another Mary, from the town of Magdala and another Mary from Bethany.

But if you look at the twelve sons of Jacob, they were not exemplary characters.  And the bible does not hide their sins and foibles (these are the guys who sold their brother Joseph into slavery).  Nonetheless they were called to assume a particular responsibility.  The same is true with the New Testament twelve.  These apostles are to be spokesmen for the community of disciples and official eyewitnesses of the resurrection, priests of the new covenant, the very first stewards of the mysteries of God.

But Peter was initially the weakest and most inconsistent of them all.  One minute Jesus calls him “Rock,” the next minute, Satan.

Open about their Weaknesses

But frankly, none of them look very good.  Even John looks bad when his mom jockeys to get him preferred seating in the kingdom.  Incidentally, if you want logical proof of the authenticity of the New Testament writings, look no further.  If you were to preside over the publication of fraudulent stories in which you play a prominent role, wouldn’t you make sure you looked like a hero?  No one would propagate a hoax that made them look as bad as the twelve apostles look in the gospels.

But Jesus knew what he was doing when he chose them.  He had come not for the healthy, but the spiritually sick.  He came to make the weak strong through the power of the Spirit.

For three years the twelve were constantly confronted with their own brokenness so that they could have compassion on those they were called to serve.  After Pentecost, they came to experience a supernatural power that transformed them.  Thus they were equipped to lead others on a journey of transformation by the power of the word and the sacraments which Christ had entrusted to them.

Faithfulness to their vocation cost them dearly: beatings, imprisonments, and finally martyrdom.  Tradition tells us that all of the twelve apostles, except for John, met such a fate.  So even in death, they are witnesses to the love of Christ, which is stronger than death.  And they are witnesses also to the fact that God is in the business of doing extraordinary things through ordinary people.

Faithfulness to their apostolic vocation led most of the Twelve apostles to martyrdom according to tradition.  Nonetheless their apostolate laid the foundation of a church that has spanned the centuries and the continents.  See what St. Paul says about himself and what it means to be an apostle in I Corinthians 4:1-16.

For more on the Twelve, see St. John Chrysostom’s homily on The Apostles – Timid Men who Won the World.