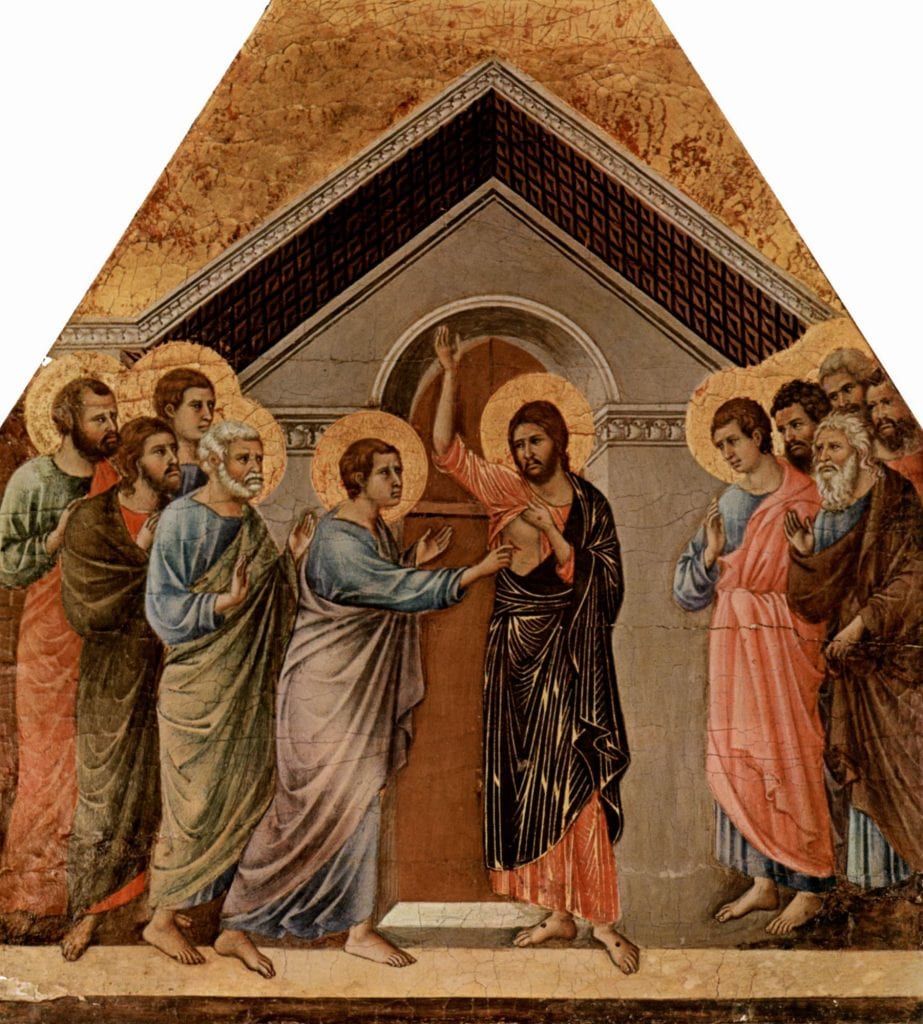 Tradition of the Apostles — Tertullian

The Tradition of the Apostles
Tertullian
Priest and Early Church Father

Our Lord Jesus Christ himself declared what he was, what he had been, how he was carrying out his Father’s will, what obligations he demanded of men. This he did during his earthly life, either publicly to the crowds or privately to his disciples. Twelve of these he picked out to be his special companions, appointed to teach the nations.

One of them fell from his place. The remaining eleven were commanded by Christ, as he was leaving the earth to return to the Father after his resurrection, to go and teach the nations and to baptize them into the Father, the Son and the Holy Spirit.

The apostles cast lots and added Matthias to their number, in place of Judas, as the twelfth apostle. The authority for this action is to be found in a prophetic psalm of David. After receiving the power of the Holy Spirit which had been promised to them, so that they could work miracles and proclaim the truth, they first bore witness to their faith in Jesus Christ and established churches throughout Judea. They then went out into the whole world and proclaimed to the nations the same doctrinal faith.

They set up churches in every city. Other churches received from them a living transplant of faith and the seed of doctrine, and through this daily process of transplanting they became churches. They therefore qualify as apostolic churches by being the offspring of churches that are apostolic.

Every family has to be traced back to its origins. That is why we can say that all these great churches constitute that one original Church of the apostles; for it is from them that they all come. They are all primitive, all apostolic, because they are all one. They bear witness to this unity by the peace in which they all live, the brotherhood which is their name, the fellowship to which they are pledged. The principle on which these associations are based is common tradition by which they share the same sacramental bond.

The only way in which we can prove what the apostles taught – that is to say, what Christ revealed to them – is through those same churches. They were founded by the apostles themselves, who first preached to them by what is called the living voice and later by means of letters.

The Lord had said clearly in former times: I have many more things to tell you, but you cannot endure them now. But he went on to say: When the Spirit of truth comes, he will lead you into the whole truth.Thus Christ shows us that the apostles had full knowledge of the truth, for he had promised that they would receive the whole truth through the Spirit of truth. His promise was certainly fulfilled, since the Acts of the Apostles prove that the Holy Spirit came down on them.

Tertullian, son of a Roman centurion from North Africa, was a lawyer who was converted to Christianity near the end of the second century. Eloquent in both Greek and Latin, he set himself to defending the faith against the pagans as well as heretical Christians and in so doing coined some of the key theological terms and phrases of the Christian tradition including the Latin word “trinity.” He unfortunately was drawn into a rigorist sect called the Monanists around 210 AD and died around 225 separated from full communion with the bishops of the Catholic Church. Nevertheless, his early writings give powerful witness to the faith that comes to us from the apostles.

Tertullian, son of a Roman centurion from North Africa, was born around 160A.D. He received a good education in literature and rhetoric and probably practiced law for a while before being converted to Christianity around the year 197A.D. It is the Church Father St. Jerome who tells us that Tertullian became a priest, but there are some indications that he may have remained a layman. What is clear is that eloquent as he was in both Greek and Latin, Tertullian quickly after his conversion set himself to defending the Catholic faith against the pagans as well as heretical Christians. In so doing coined some of the key theological terms and phrases of the Christian theological tradition. It is in Tertullian’s writings that we first find the Latin word “trinity” to describe the relationship between the Father, Son, and Holy Spirit, whom he taught were “one God in three persons.” This remains a classic Trinitarian formula to this day. He also made a great contribution to Christology, the branch of theology which seeks to understand the person of Jesus Christ and how divinity and humanity are related in him. It is Tertullian who gives us the formula later canonized by the Ecumenical Council of Chalcedon, teaching that Christ is “one person in two natures.” Tertullian is the author of many apologetic and theological works and is one of the most quotable of the Early Church Fathers. His is the famous phrase “the blood of the martyrs is the seed of the Church.” And criticizing the reliance on pagan philosophy that he detects in many heretics, he coined yet another famous phrase: “what has Athens to do with Jerusalem?” Though Tertullian made great and lasting contributions to a wide scope of Catholic doctrines (Trinity, Christology, ecclesiology, sacramental theology, etc.), he always had a tendency towards severity and rigorism. This tendency sadly drew him into a rigorist heretical sect called the Monanists around 210 AD. Tragically, Tertullian died around 225 A.D. separated from full communion with the bishops of the Catholic Church whose authority he earlier upheld. Nevertheless, his early writings give powerful witness to the faith that comes to us from the apostles. The writings listed below are far from complete–they are mostly intended to provide a few of the more inspirational passages from his works that can be used to enrich our prayer and give us a taste of the teaching of this influential Early Christian writer.