This third in a series on Understanding the Mass focuses on the way the Lord Jesus is really present in his body, the church, as well as his real presence in the priest.

Whether they’re Catholic or not, whether they understand it or not, most people have heard the term, “the real presence,” and know it has something to do with what Catholics believe about the Mass. Indeed, the Church teaches that Christ is really present in the Eucharist — and present in at least four different ways. Today we will look at two of them.

Real Presence in His Body, the Church

First, Christ is present in the congregation. Jesus said He’s there whenever two or three are gathered in His name (Mt 18:20), and usually the Sunday Mass congregation numbers more than two or three! Even when it’s hard to see Christ in our fellow Mass-goers, He’s really there. People may arrive distracted and preoccupied, but as they enter that church they’re no longer just scattered individuals, but members of Christ’s body. Whether conscious of it or not, they’re being drawn together into the Body of Christ.

At Mass we deepen our communion with the whole Church, as well as with the Lord. That’s what the sign of peace is about. Though sometimes viewed as a trendy idea inserted into the Mass around 1970, the sign of peace is really a recovery of a practice of the early Church. It recalls what Jesus said in Matthew 5:23-24: “If you are offering your gift at the altar, and there remember that your brother has something against you, leave your gift before the altar and go; first be reconciled to your brother, then come and offer your gift.” The sign of peace is not so much intended as a opportunity for back-slapping fellowship as a sign that we hold nothing against anyone. It means we renounce all bitterness, resentment, and jealousy as we come as one body to receive the Lord together. 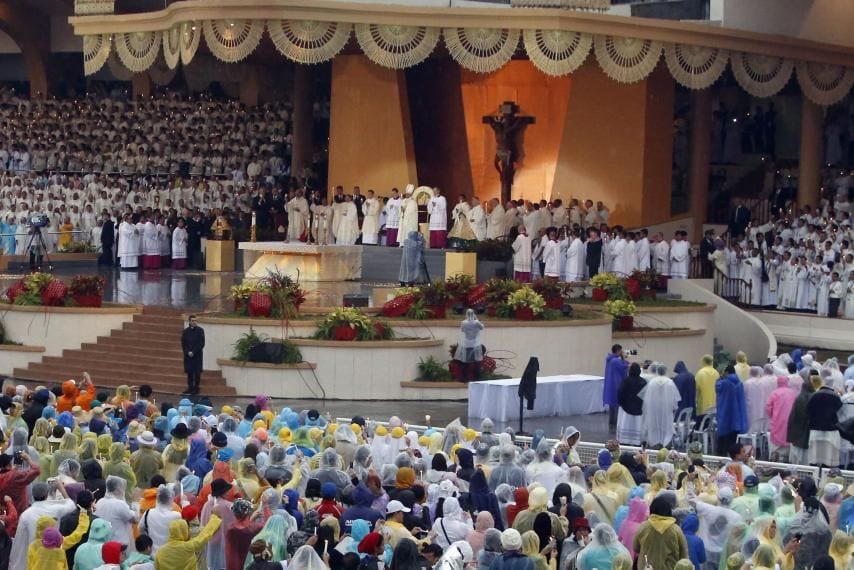 Often, our conscience is clear about not having committed any sins against the people in the congregation. We haven’t backed into someone’s car and not informed them, nor have we defamed anyone or robbed or defrauded them. But along with sins of commission, it’s important to take note of our sins of omission.

In his first letter to the church in Corinth, Paul upbraided the Corinthians for what they were failing to do. Apparently, there were rich members of the congregation who were oblivious to the needs of the poor members. They’d eat a magnificent meal while the poor sat there hungry and thirsty, and afterwards rich and poor would all come together to celebrate the Eucharist. That’s seriously wrong, Paul told them. In fact, “that is why many of you are weak and ill, and some have died” (1 Cor 11:30).

The Real Presence of Christ’s Priesthood

Second, Christ is present at Mass in the person of the priest. It’s not a question of whether the ordained minister is an exciting preacher or a particularly holy person. Many of our priests are in fact inspiring in holiness and powerful in their preaching. Others are not. But the good news is that Christ’s presence doesn’t depend on the priest’s personal virtue. Christ makes Himself present through the charism that the priest has been given through ordination. This is one of the reasons that the Catholic priest wears vestments when he celebrates the Eucharist: it signifies that he’s acting in the person of Christ, not in his own person.

Actually, Jesus is the only priest. Thomas Aquinas put it straightforwardly: “Only Christ is the true priest, the others being only his ministers” (Catechism, par. 1545). The ordained priest is an icon or image of Christ. Through him, Jesus makes His priesthood present in a very special way.

If you’re happy with your parish priest, if his celebration of the Mass moves you, that’s a tremendous blessing. Thank God for him! If he’s less than inspiring and somehow makes it harder for you to pray, then pray for him. Priests have an awesome responsibility and a very difficult job. All of them deserve our loving support.

One of the things I love about St. Francis of Assisi is that he never took pot-shots at the clergy. In an age of widespread clerical corruption, Francis always thanked God for being able to receive the sacred Body and Blood from the hands of a priest, whether worthy or unworthy. More effectively than denunciations, Francis’s loving example brought about a change in priests, calling them to greater virtue and deeper life in Christ.

This article is third in a five-part series on understanding the Mass.  The entire series is adapted from the book by Marcellino D’Ambrosio, Exploring the Catholic Church.  This excerpt focuses on the “real presence” of Christ in the Mass based on his presence in the Church members, the body of Christ, and the ordained priest.  Part four will discuss Christ’s presence in the Word and the presence of his body and blood through the sacrament.  To read other parts of the series, click on the links below.