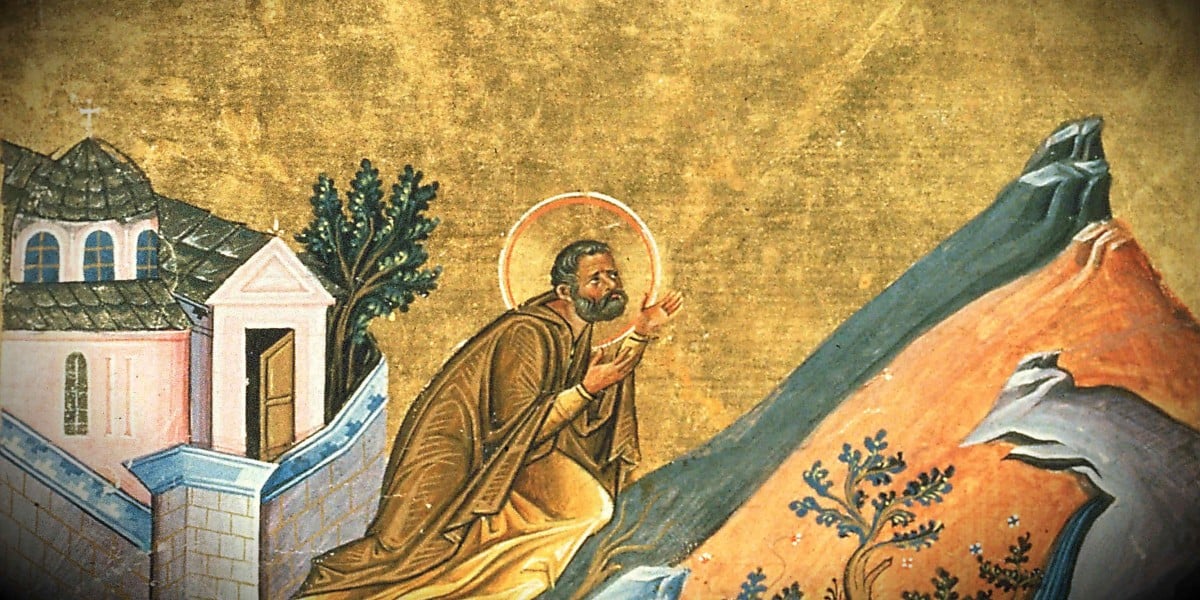 Why the Word assumed a Body – Athanasius

In this excerpt from his work On the Incarnation, St. Athanasius says that the Word of God entered our world and assumed a body so that he could die for us, so great is his loving kindness.  It is read by the Church on the feast of St. Athanasius on May 2.

The Word of God, incorporeal, incorruptible and immaterial, entered our world. Yet it was not as if he had been remote from it up to that time. For there is no part of the world that was ever without his presence; together with his Father, he continually filled all things and places.

He took to Himself a Body

Out of his loving-kindness for us he came to us, and we see this in the way he revealed himself openly to us. Taking pity on mankind’s weakness, and moved by our corruption, he could not stand aside and see death have the mastery over us; he did not want creation to perish and his Father’s work in fashioning man to be in vain. He therefore took to himself a body, no different from our own, for he did not wish simply to be in a body or only to be seen.

If he had wanted simply to be seen, he could indeed have taken another, and nobler, body. Instead, he took our body in its reality.

Within the Virgin he built himself a temple, that is, a body; he made it his own instrument in which to dwell and to reveal himself. In this way he received from mankind a body like our own, and, since all were subject to the corruption of death, he delivered this body over to death for all, and with supreme love offered it to the Father. He did so to destroy the law of corruption passed against all men, since all died in him.

The law, which had spent its force on the body of the Lord, could no longer have any power over his fellowmen. Moreover, this was the way in which the Word was to restore mankind to immortality, after it had fallen into corruption, and summon it back from death to life. He utterly destroyed the power death had against mankind – as fire consumes chaff – by means of the body he had taken and the grace of the resurrection.

This is the reason why the Word assumed a body that could die, so that this body, sharing in the Word who is above all, might satisfy death’s requirement in place of all. Because of the Word dwelling in that body, it would remain incorruptible, and all would be freed for ever from corruption by the grace of the resurrection.

He offered The Instrument of his Body

In death the Word made a spotless sacrifice and oblation of the body he had taken. by dying for others, he immediately banished death for all mankind.

In this way the Word of God, who is above all, dedicated and offered his temple, the instrument that was his body, for us all, as he said, and so paid by his own death the debt that was owed. The immortal Son of God, united with all men by likeness of nature, thus fulfilled all justice in restoring mankind to immortality by the promise of the resurrection.

The corruption of death no longer holds any power over mankind, thanks to the Word, who has come to dwell among them through his one body.

Banner/featured image Athanasius the Confessor of Constantinople by an unknown artist. Public domain.

This excerpt from St. Athanasius’ famous work On the Incarnation (8-9, PG 25, 110-111) portrays the drama of the Word of God breaking into our world and assuming a human body in order to save us.  It appears in the Roman Office of Readings for May 2, the liturgical memorial (feast) of Saint Athanasius,  defender of the full divinity and humanity of the Lord Jesus Christ.

St. Athanasius was born in Alexandria, Egypt, around the year 296 AD. Most probably, he was educated in the famous catechetical school of that city, which decades earlier was led by Clement of Alexandria and then Origen. Athanasius became a deacon and secretary to Alexandria’s bishop, Alexander, and in that capacity accompanied Alexander to the first great Ecumenical Council, the Council of Nicaea in 325 AD. Shortly after returning from the Council (328), Athanasius was elected to succeed Alexander, and so became patriarch archbishop of Alexandria, the greatest episcopal see in the Church after Rome. St. Athanasius is one of the most important of the Early Church Fathers, best known for his tireless proclamation of the Council of Nicaea’s profession of faith in the full divinity of Christ during the troubled period of the Arian heresy, which denied Jesus’ equality with the Father. For decades after the Council, powerful forces in the government lobbied for an Arian form of Christian faith. Athanasius bravely stood against this and was exiled numerous times by the government. He was forced to flee to Rome in 339 where he stayed for 7 years in exile, establishing close relationships with the Roman Church which supported him in his battle for orthodoxy throughout the rest of his life. While still a deacon in his twenties, Athanasius wrote his famous treatise, On the Incarnation, which remains one of two best known works. The other is his Life of Antony, the spiritual classic which tells the story of the man who initiated the monastic movement in Egypt and indeed throughout the entire Christian world. St. Antony and his monks were stalwart supporters of Athanasius throughout his struggle against Arianism. From 339 to 359 Athanasius also wrote a number of other works defending the orthodox faith of the Council of Nicaea. On account of his great holiness and exceptional teaching, he is regarded by Catholics as one of the Doctors of the Church. Athanasius died in Alexandria on May 2, 373 and to this day he is honored on May 2 in the Roman liturgy. Biography by Dr. Italy For more on Athanasius and other Early Church Fathers, see When the Church Was Young: Voices of the Early Fathers.