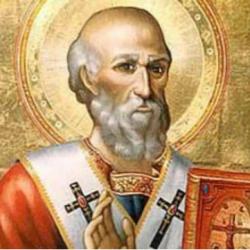 St. Athanasius was born in Alexandria, Egypt, around the year 296 AD. Most probably, he was educated in the famous catechetical school of that city, which decades earlier was led by Clement of Alexandria and then Origen. Athanasius became a deacon and secretary to Alexandria’s bishop, Alexander, and in that capacity accompanied Alexander to the first great Ecumenical Council, the Council of Nicaea in 325 AD. Shortly after returning from the Council (328), Athanasius was elected to succeed Alexander, and so became patriarch archbishop of Alexandria, the greatest episcopal see in the Church after Rome. St. Athanasius is one of the most important of the Early Church Fathers, best known for his tireless proclamation of the Council of Nicaea’s profession of faith in the full divinity of Christ during the troubled period of the Arian heresy, which denied Jesus’ equality with the Father. For decades after the Council, powerful forces in the government lobbied for an Arian form of Christian faith. Athanasius bravely stood against this and was exiled numerous times by the government. He was forced to flee to Rome in 339 where he stayed for 7 years in exile, establishing close relationships with the Roman Church which supported him in his battle for orthodoxy throughout the rest of his life. While still a deacon in his twenties, Athanasius wrote his famous treatise, On the Incarnation, which remains one of two best known works. The other is his Life of Antony, the spiritual classic which tells the story of the man who initiated the monastic movement in Egypt and indeed throughout the entire Christian world. St. Antony and his monks were stalwart supporters of Athanasius throughout his struggle against Arianism. From 339 to 359 Athanasius also wrote a number of other works defending the orthodox faith of the Council of Nicaea. On account of his great holiness and exceptional teaching, he is regarded by Catholics as one of the Doctors of the Church. Athanasius died in Alexandria on May 2, 373 and to this day he is honored on May 2 in the Roman liturgy. Biography by Dr. Italy For more on Athanasius and other Early Church Fathers, see When the Church Was Young: Voices of the Early Fathers.