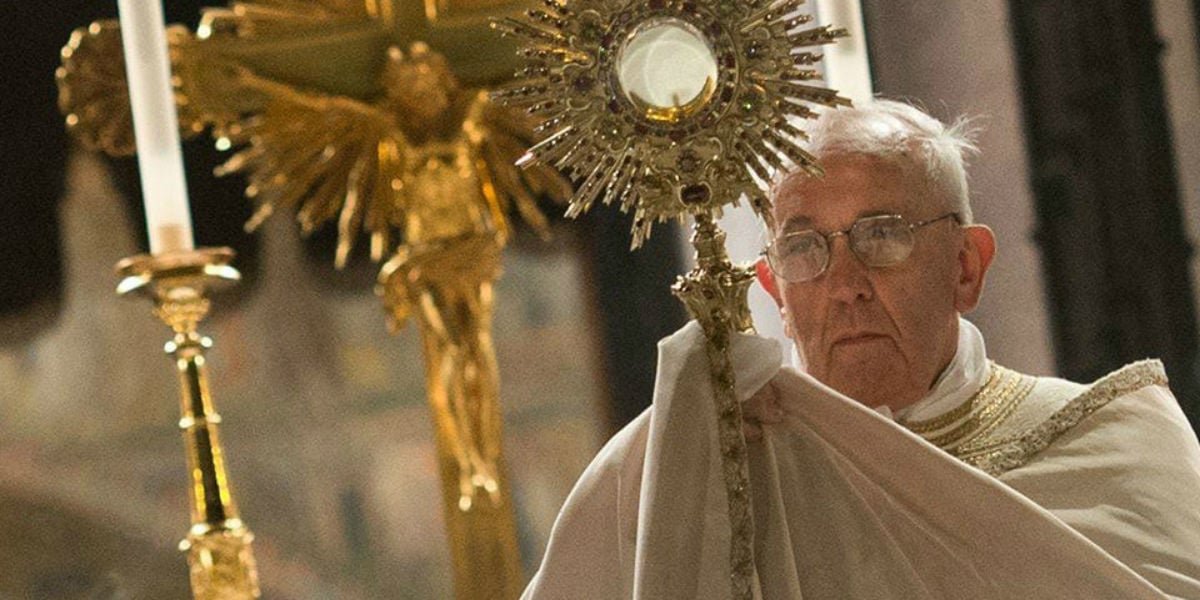 The Mass . . . the Eucharist . . . the Lord’s Supper . . . the Blessed Sacrament . . . holy communion . . . transubstantiation — what Catholics have believed and taught about this awesome reality, by whatever name it is called, is what is celebrated on the Feast of Corpus Christi, the Body and Blood of Christ.  But to understand it, one must understand the Old Testament’s teaching on sacrifice, blood, covenant and communion.

Catholics don’t just go to church on Sunday, like other Christians.  They go to Mass.  Christmas, New Years, weddings, funerals.  It seems that we just can’t seem to do anything important without this ceremony which some regard as a sacrifice and others as a fellowship meal and still others as “the real presence.”

So which is it–sacrifice, supper, or “real presence” and why the fixation upon it?

Like most things in the New Testament, it is really impossible to understand this fully without some serious knowledge of what we now call the Old Testament.

When I first read the account of Moses asking Pharaoh to “let my people go,” I thought that Moses was using a God-sanctioned ruse when he told Pharaoh that the reason he wanted to take the people and their flocks out of Egypt was that they could offer a sacrifice to their God in the desert.But that was indeed the real reason after all.  God liberated them from slavery to Pharaoh so that they could be free to enter into an exclusive, intimate relationship with Himself, a covenant.  He gave them the law that would be the condition of this covenant on Mt. Sinai, and, after they said “I do,” they sealed the deal through a rather strange ritual.  It was strange, by the way, even for them.

Oh, sacrifice was normal enough.  You offer the best animals you have to God.  Sometimes you poured out their blood to God, then burned the entire animal.  Other times you offered a perfect animal to God as atonement for sin, with the blood and fat going to God and the choicest portions going to feed the priests, God’s representatives.  Most often, though, the blood and fat went to God, and the rest of the animal was solemnly eaten by those offering the sacrifice (often called a “Peace Offering”) in a special thanksgiving meal, a sign of communion with God, who was considered to be present at the meal (Ex 18:12).  For after all, what more universal sign of sharing a common life is there than taking a meal together?

But the sacrifice to seal the first covenant, aka “the Old Testament,” was different.  Half of the blood of the sacrificed animals was poured out to God at the base of the altar.  The other half was sprinkled upon the people.  Blood equaled life in the mind of the ancient Israelites, and it was forbidden to consume blood, since all life belonged to God.  Here Israel and God are bound by a blood ceremony, becoming intimate kin, a family.  Then Moses and the elders further celebrated their new blood relationship with God by eating the sacrificed animals in God’s presence, on the Holy Mountain (that’s what Exodus 24:11 means–after seeing God, they could still eat and drink).

In the New Covenant, God takes things a step further.  The liberation is not just from the drudgery of Pharaoh’s building projects, but from sin, Satan, and even death.  To win this prize, God the Son becomes man and offers his body as the ultimate sacrifice that takes away sin and creates a degree of fellowship between God and man hitherto inconceivable.

Becoming the Body of Christ

Not only is his blood poured out at the base of the altar of the cross, as an offering of his life to the Father, but it is given to his disciples to drink, under the sacramental form of wine – “this is the New Covenant in my blood’ (Luke 22:20).  This is a symbol that actually is what it symbolizes, and transmits what it contains–the immortal life of the God-man, which binds us to God like nothing else ever could.  And and it empowers us to be like him, live like him, indeed become him.  You are what you eat.  The Body and blood of Christ are given as our food so that we may become the Body of Christ and his very life coursing through our veins.

Real presence?  Fellowship Meal?  Sacrifice?  Yes, absolutely.  All three, or none at all.

This post on transubstantiation, or the “real presence of Christ’s body and blood in the Eucharist focuses on the Old Testament background of sacrifice and Passover.  It is a reflection on the readings for the Solemnity of Corpus Christi (Genesis 14:18-20; Psalm 110; I Corinthians 11:23-26; Luke 9:11-17).