Ambrose reflects on the Virgin Mary’s Visitation of her cousin Elizabeth as recounted by the evangelist Luke in the first chapter of his Gospel.  The Visitation of the Blessed Virgin Mary is the second joyful mystery of the rosary.

T
hen the angel revealed his message to the Virgin Mary he gave her a sign to win her trust. He told her of the motherhood of an old and barren woman to show that God is able to do all that he wills.

When she hears this Mary sets out for the hill country. She does not disbelieve God’s word; she feels no uncertainty over the message or doubt about the sign. She goes eager in purpose, dutiful in conscience, hastening for joy.

Filled with God, where would she hasten but to the heights? The Holy Spirit does not proceed by slow, laborious efforts. Quickly, too, the blessings of her coming and the Lord’s presence are made clear: as soon as Elizabeth heard Mary’s greeting the child leapt in her womb, and she was filled with the Holy Spirit.

Notice the contrast and the choice of words. Elizabeth is the first to hear Mary’s voice, but John is the first to be aware of grace. She hears with the ears of the body, but he leaps for joy at the meaning of the mystery. She is aware of Mary’s presence, but he is aware of the Lord’s: a woman aware of a woman’s presence, the forerunner aware of the pledge of our salvation. The women speak of the grace they have received while the children are active in secret, unfolding the mystery of love with the help of their mothers, who prophesy by the spirit of their sons. 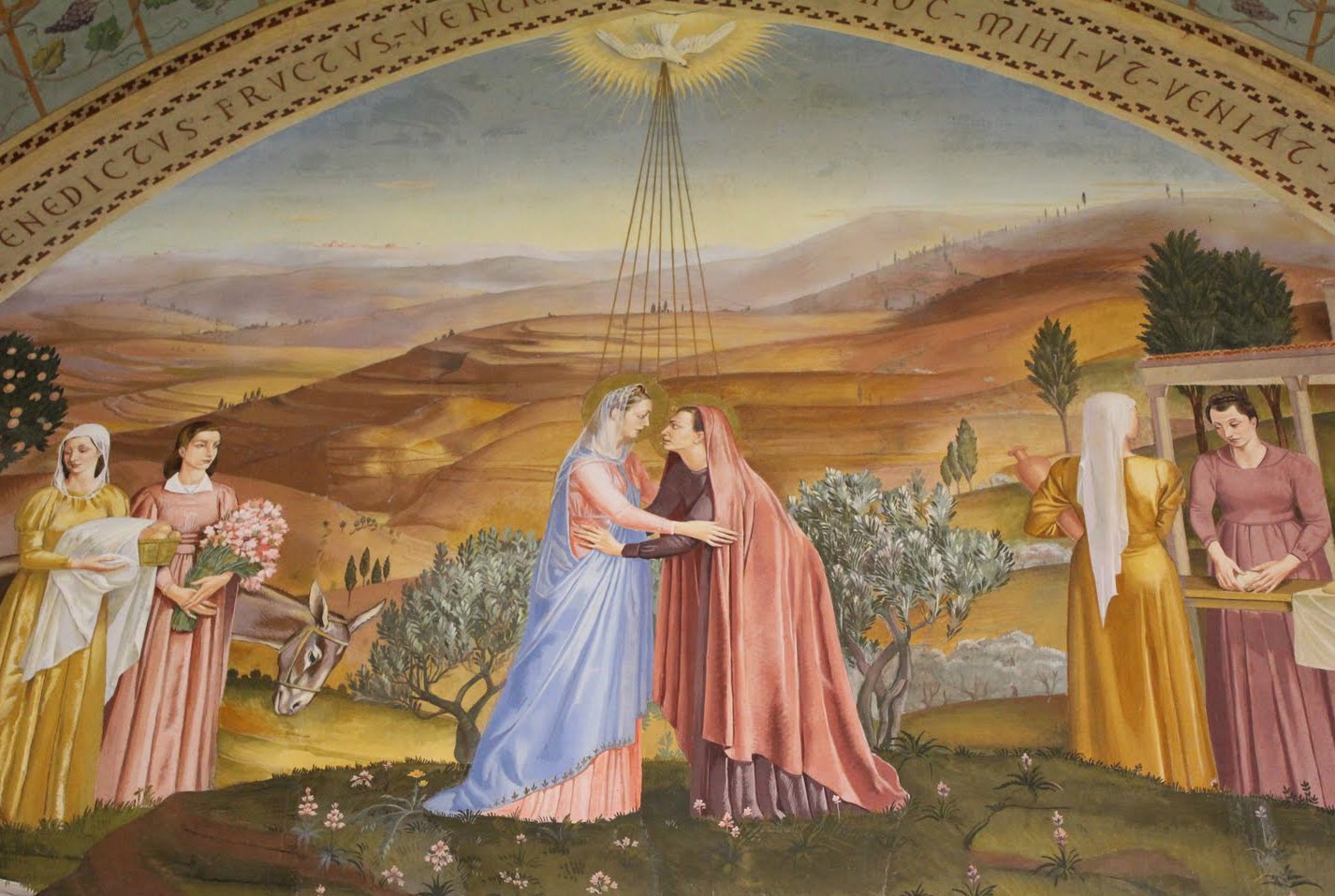 You also are blessed because you have heard and believed. A soul that believes both conceives and brings forth the Word of God and acknowledges his works.

Let Mary’s soul be in each of you to proclaim the greatness of the Lord. Let her spirit be in each to rejoice in the Lord. Christ has only one mother in the flesh, but we all bring forth Christ in faith. Every soul receives the Word of God if only it keeps chaste, remaining pure and free from sin, its modesty undefiled. The soul that succeeds in this proclaims the greatness of the Lord, just as Mary’s soul magnified the Lord and her spirit rejoiced in God her Savior. In another place we read: Magnify the Lord with me. The Lord is magnified, not because the human voice can add anything to God but because he is magnified within us. Christ is the image of God, and if the soul does what is right and holy, it magnifies that image of God, in whose likeness it was created and, in magnifying the image of God, the soul has a share in its greatness and is exalted.

This meditation on the Visitation of the Blessed Virgin Mary of her cousin, Elizabeth, is an excerpt from St. Ambrose’s commentary on Luke (Lib. 2, 19.22-23. 26-27: CCL 14, 39-42) is used in the Roman Office of Readings during the Fourth week of Advent, on December 21. The featured image is taken from the Basilica of the Visitation in Ein Karem, a village in the hill country of Judea where John the Baptist was born.

St. Ambrose of Milan’s life (Sant Ambroggio de Milano in Italian) is a particularly fascinating story. St. Ambrose was born around 339 in what is now Trier, Germany, the son of the Roman prefect of Gaul. Following his father’s footsteps, Ambrose embarked upon a career in law and politics and by 370 AD, he had become the Imperial governor of Northern Italy. When the episcopal see of Milan became vacant in 374, the people demanded that Saint Ambrose be made their bishop. The neighboring bishops and the Emperor convinced him to accept this call as the will of God, and so the catechumen Ambrose was baptized and ordained first deacon, then priest, then bishop, all in a single week! This politician-turned churchman was profoundly aware of his lack of preparation for this great responsibility and so set himself immediately to prayer and the study of Scripture. His deep spirituality and love of God’s Word married together with the oratorical skill acquired in law and politics made St. Ambrose one of the greatest preachers of the early church. St. Ambrose proved to be a fierce opponent of heresy, paganism, and hypocrisy. He battled to preserve the independence of the Church from the state and courageously excommunicated the powerful Catholic Emperor Theodosius I for a massacre of innocent civilians in Thessalonica. St. Ambrose also had a significant impact on sacred music through the composition of hymns and psalm tones that are known to this day as Ambrosian chant. Besides numerous sermons and treatises on the spiritual life, Saint Ambrose is responsible for two of the first great theological works written in Latin, De Sacramentis on the Sacraments and De Spiritu Sancto on the Holy Spirit. Around 385, an ambitious professor of public speaking named Augustine came to hear Saint Ambrose preach in order to study his technique, and in the process, was attracted to the Catholic faith. In 386 Augustine was baptized by St. Ambrose and went on to become bishop of Hippo in North Africa. Ambrose and his pupil, Augustine, together with St. Jerome and St. Gregory the Great, make up the four original Doctors of the Latin Church. Saint Ambrose, the great bishop of Milan, died on Holy Saturday (April 4) in the year 397 AD. His feastday in the Roman calendar is December 7, the day he was ordained bishop. From the Roman liturgy for the Feast of St. Ambrose: “Lord, you made Saint Ambrose an outstanding teacher of the Catholic faith and gave him the courage of an apostle. Raise up iin your Church more leaders after your own heart, to guide us with courage and wisdom. We ask this through our Lord Jesus Christ, your Son, who lives and reigns with you and the Holy Spirit, one God forever and ever. Amen.”  (bio by Dr. Italy)