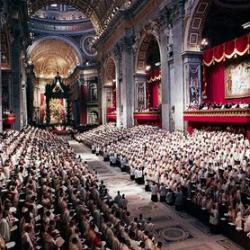 The Second Vatican Council was the 21st Ecumenical Council of the Catholic Church, announced by Pope John XXIII in January 1959. After several years of planning, the Council was formally convoked in September 1962. For the next three years, over 2,000 bishops and theological advisors met in Rome each September through December, returning home to care for their flocks while committee members continued to hammer away on drafts of the sixteen documents ultimately promulgated by the Council. Pope John XXIII died after the first session and was succeeded by Pope Paul VI who solemnly closed the council in December 1965.  For orientation on Vatican II and how best to approach its teaching, see READING THE DOCUMENTS OF VATICAN II by Dr. Italy.