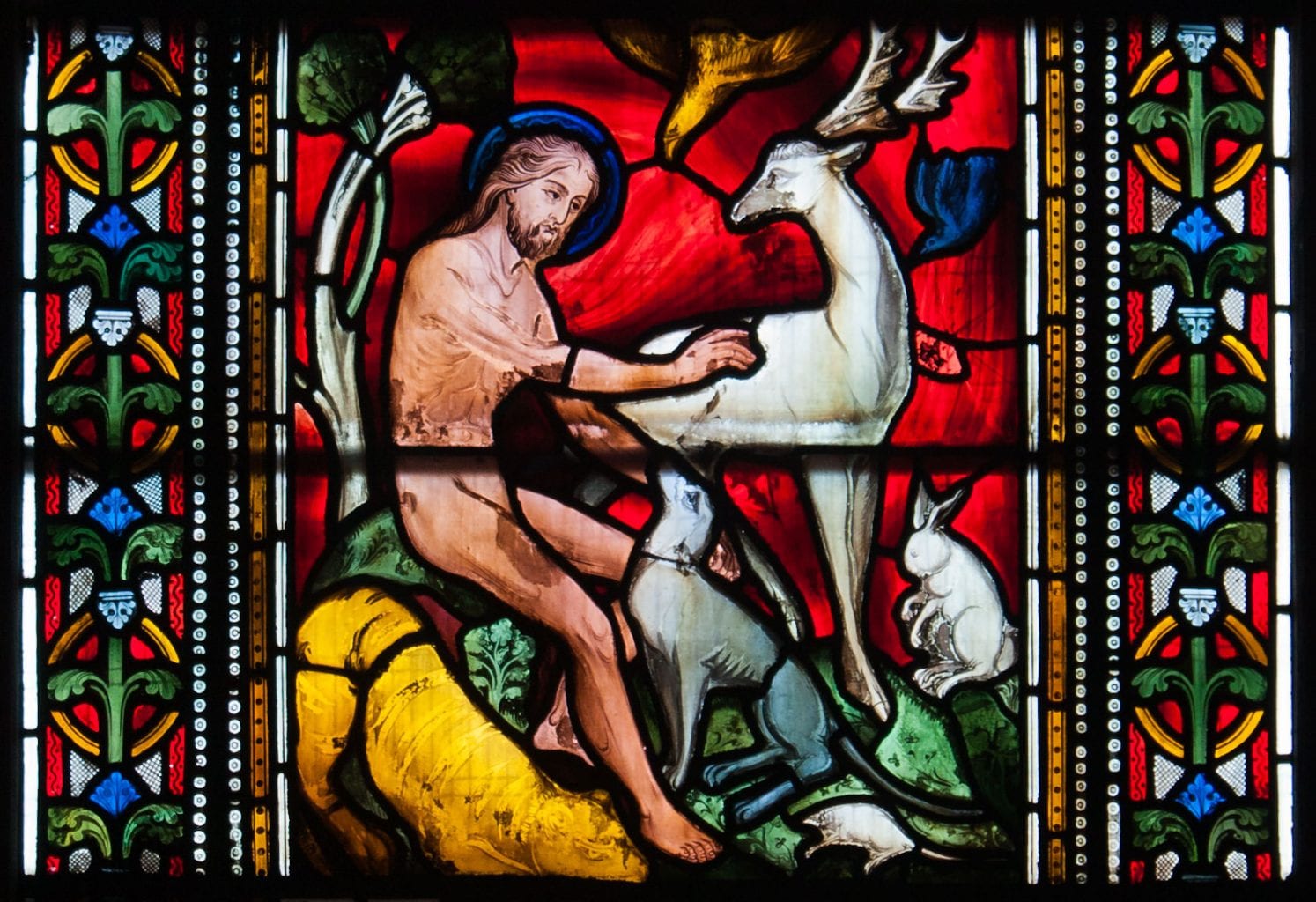 St. Peter Chrysologus, reflecting on the words of St. Paul, contrasts the first, earthly man with our Lord Jesus Christ, viewed as the second, last Adam, the man from heaven.  We are reborn in the image of the new Adam through the womb of the baptismal font, by the power of the Holy Spirit.

The holy Apostle has told us that the human race takes its origin from two men, Adam and Christ; two men equal in body but unequal in merit, wholly alike in their physical structure but totally unlike in the very origin of their being.  The first man, Adam, he says, became a living soul, the last Adam a life-giving spirit.

The First and the Last

The first Adam was made by the last Adam, from whom he also received his soul, to give him life. The last Adam was formed by his own action; he did not have to wait for life to be given him by someone else, but was the only one who could give life to all. The first Adam was formed from valueless clay, the second Adam came forth from the precious womb of the Virgin. In the case of the first Adam, earth was changed into flesh; in the case of the second Adam, flesh was raised up to be God.

What more need be said? The second Adam stamped his image on the first Adam when he created him. That is why he took on himself the role, and the name, of the first Adam, in order that he might not lose what he had made in his own image. The first Adam, the last Adam; the first had a beginning, the last knows no end. The last Adam is indeed the first; as he himself says: I am the first and the last.

The earth comes before its fruit, but the earth is not so valuable as its fruit. The earth exacts pain and toil; its fruit bestows subsistence and life. The prophet rightly boasted of this fruit: Our earth has yielded its fruit. What is this fruit? The fruit referred to in another place: I will place upon your throne one who is the fruit of your body. The first man, says the Apostle, was made from the earth and belongs to the earth; the second man is from heaven, and belongs to heaven.

Baptismal Font as a Womb

The reason is, brethren, that the heavenly Spirit, by the mysterious infusion of his light, gives fertility to the womb of the virginal font. The Spirit brings forth as men belonging to heaven those whose earthly ancestry brought them forth as men belonging to the earth, and in a condition of wretchedness; he gives them the likeness of their Creator. Now that we are reborn, refashioned in the image of our Creator, we must fulfill what the Apostle commands: So, as we have worn the likeness of the man of earth, let us also wear the likeness of the man of heaven.

Now that we are reborn, as I have said, in the likeness of our Lord, and have indeed been adopted by God as his children, let us put on the complete image of our Creator so as to be wholly like him, not in the glory that he alone possesses, but in innocence, simplicity, gentleness, patience, humility, mercy, harmony, those qualities in which he chose to become, and to be, one with us.

This excerpt on Christ as the new Adam and our rebirth in him through the womb of the baptismal font is an excerpt from a sermon by St. Peter Chrysologus (Sermo 117: PL 52, 520-521).  It is used by the Roman Catholic Church for the Divine Office of Readings for Saturday of the 29th week of Ordinary with the accompanying biblical reading taken from Baruch 3:9-4:4.

For more on Baptism in the Early Church,  see the BAPTISM SECTION of the Crossroads Initiative Library.

For more on Jesus Christ as the New Adam, see the HUMANITY OF JESUS Section of the Crossroads Initiative Library.

St. Peter Chrysologus was born about the year 380 at Imola in the region of Emilia, Italy. After serving as a deacon in Imola, Saint Peter became the bishop of Ravenna, Italy in 424. Little reliable information about St. Peter’s life survives, except that he successfully drove heresy and the remnants of Roman paganism from his diocese through pastoral care and very practical yet passionate preaching. Peter’s always brief sermons were so inspiring that he was given the title “Chrysologus” (Greek for “Golden-worded) and was eventually declared a “Doctor of the Church” by Pope Benedict XIII in 1729. St. Peter, a Father of the Church, died around the year 450, during the reign of Pope Leo the Great, just a year before the ecumenical council of Chalcedon which defined the relation of the human and divine natures in the one person of Jesus Christ, the redeemer. Biography by Dr. Italy