Anointed with the Oil of Gladness – Cyril of Jerusalem on Confirmation

Bishop of Jerusalem in the mid 4th century, St. Cyril here instructs recently initiated Christians about the holy oil of gladness, called chrism, that make them anointed ones, sharing in the anointing of Christ through the sacrament of confirmation.

When we were baptized into Christ and clothed ourselves in him, we were transformed into the likeness of the Son of God. Having destined us to be his adopted sons, God gave us a likeness to Christ in his glory, and living as we do in communion with Christ, God’s anointed, we ourselves are rightly called “the anointed ones.” When he said: Do not touch my anointed ones, God was speaking of us.

We became “the anointed ones” when we received the sign of the Holy Spirit. Indeed, everything took place in us by means of images, because we ourselves are images of Christ. Christ bathed in the river Jordan, imparting to its waters the fragrance of his divinity, and when he came up from them the Holy Spirit descended upon him, like resting upon like.

So we also, after coming up from the sacred waters of baptism, were anointed with chrism, which signifies the Holy Spirit, by whom Christ was anointed and of whom blessed Isaiah prophesied in the name of the Lord: The Spirit of the Lord is upon me, because he has anointed me. He has sent me to preach good news to the poor. 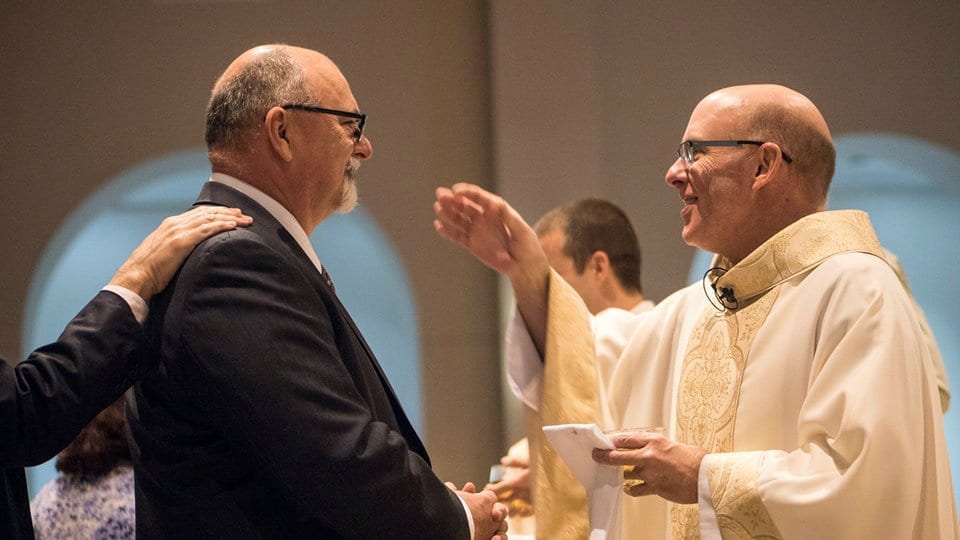 Anointing with the Oil of Gladness

Christ’s anointing was not by human hands, nor was it with ordinary oil. On the contrary, having destined him to be the Savior of the whole world, the Father himself anointed him with the Holy Spirit. The words of Peter bear witness to this: Jesus of Nazareth, whom God anointed with the Holy Spirit. And David the prophet proclaimed: Your throne, O God, shall endure for ever; your royal scepter is a scepter of justice. You have loved righteousness and hated iniquity; therefore God, your God, has anointed you with the oil of gladness above all your fellows.

But we too have been anointed with oil, and by this anointing we have entered into fellowship with Christ and have received a share in his life.

Beware of thinking that this holy oil is simply ordinary oil and nothing else. After the invocation of the Spirit it is no longer ordinary oil but the gift of Christ, and by the presence of his divinity it becomes the instrument through which we receive the Holy Spirit. While symbolically, on our foreheads and senses, our bodies are anointed with this oil that we see, our souls are sanctified by the holy and life-giving Spirit.

For more on the sacramental anointing with sacred chrism, see the CONFIRMATION section of the Crossroads Initiative Library.

This selection describes the anointing with chrism in the  sacrament of confirmation that took place in the Jerusalem Easter vigil in the mid fourth century.  It appears in the Roman Catholic liturgy’s Office of Readings on the Friday in the Octave of Easter (Cat. 21 Mystagogica 3, 1-3 PG 33. 1087-1091).  The accompanying biblical comes from I Peter 3:18-4: 11.  Its author, St. Cyril of Jerusalem, is one of the most important sources we have for how the church celebrated the sacraments during this era.  His writings, the Jerusalem Catecheses and Mystagogia, are especially valuable as resources for RCIA and the sacraments of initiation.

St. Cyril of Jerusalem was born just about the time the Emperor Constantine legalized Christianity in the Roman Empire (313 AD) and was a boy when Queen Helena came to Jerusalem and erected the Church of the Holy Sepulchre over the site of Golgotha and the empty tomb.  This church became Cyril’s cathedral when he became bishop of the Holy City of about 349AD. St. Cyril was banished from his Jerusalem see a total of three times for his bold proclamation of faith in Christ’s full divinity during a time when many bishops and emperors favored various forms of the Arian heresy.

Saint Cyril of Jerusalem is one of the most important sources we have for how the church celebrated the liturgy and sacraments during the first few decades after the legalization of Christianity. In his famous 24 lectures commonly known as the Jerusalem Catecheses, Saint Cyril instructs new Christians in the days immediately before and after their initiation into the life of the Church at the Easter Vigil. In these catechetical instructions, which are the only documents that survive by St. Cyril, we find very strong insistence on the value and efficacy of the sacrament of baptism as well as heavy emphasis on the real presence of Christ’s body and blood in the sacrament of the Eucharist. St. Cyril of Jerusalem is considered to be one of the Early Church Fathers and Pope Leo XIII also added him to the number of the Doctors of the Catholic Churchin 1882.  He attended the First Council of Constantinople which completed the Creed commonly known as the Nicene Creed in 381, and died in 386, just five years afterwards.  (bio by Dr. Italy)