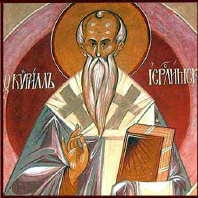 St. Cyril of Jerusalem was born just about the time the Emperor Constantine legalized Christianity in the Roman Empire (313 AD) and was a boy when Queen Helena came to Jerusalem and erected the Church of the Holy Sepulchre over the site of Golgotha and the empty tomb.  This church became Cyril’s cathedral when he became bishop of the Holy City of about 349AD. St. Cyril was banished from his Jerusalem see a total of three times for his bold proclamation of faith in Christ’s full divinity during a time when many bishops and emperors favored various forms of the Arian heresy.

Saint Cyril of Jerusalem is one of the most important sources we have for how the church celebrated the liturgy and sacraments during the first few decades after the legalization of Christianity. In his famous 24 lectures commonly known as the Jerusalem Catecheses, Saint Cyril instructs new Christians in the days immediately before and after their initiation into the life of the Church at the Easter Vigil. In these catechetical instructions, which are the only documents that survive by St. Cyril, we find very strong insistence on the value and efficacy of the sacrament of baptism as well as heavy emphasis on the real presence of Christ’s body and blood in the sacrament of the Eucharist. St. Cyril of Jerusalem is considered to be one of the Early Church Fathers and Pope Leo XIII also added him to the number of the Doctors of the Catholic Churchin 1882.  He attended the First Council of Constantinople which completed the Creed commonly known as the Nicene Creed in 381, and died in 386, just five years afterwards.  (bio by Dr. Italy)