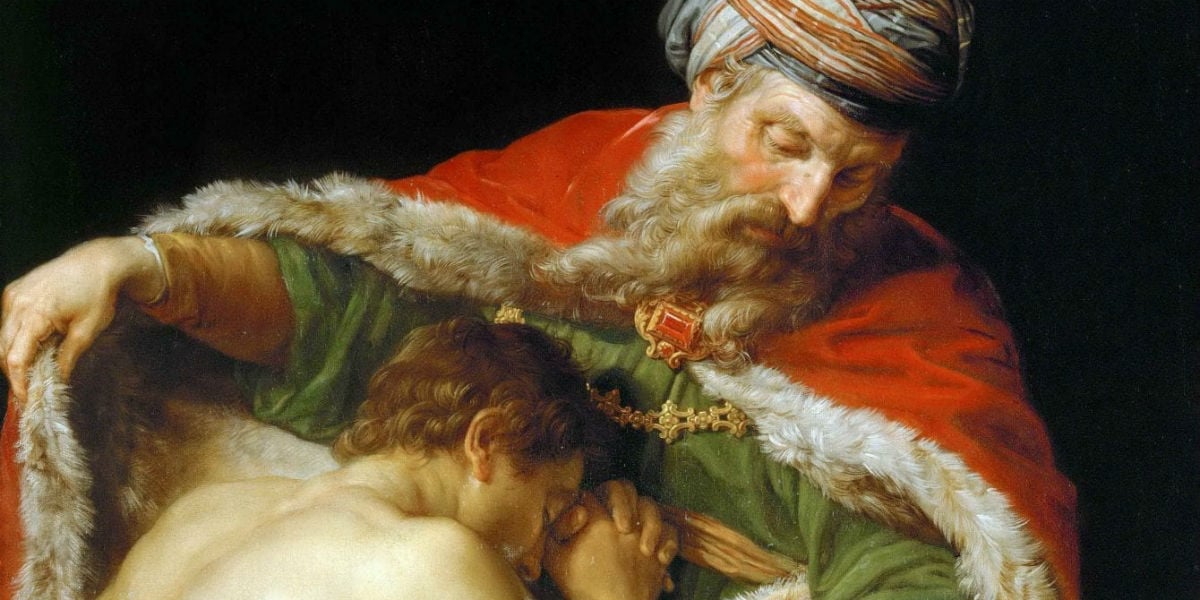 Atonement and the Prodigal Son

The parable of the Prodigal or wasteful Son is more about the loving Father.  God is not a raging tyrant who must be appeased through the suffering of his Son.  Rather it’s the extravagant love of Jesus, son of the extravagant Father, that makes atonement for our sins – the sacrifice of a spotless Passover Lamb.  For the 4th Sunday of Lent, cycle C.

For our sakes, God made him who did not know sin to be sin, so that in him we might become the very holiness of God” (2 Corinthians 5:21).

Some Christians reading these words over the last few centuries have gotten the wrong idea.  They’ve put this Scripture together with Jesus’ cry from the cross “My God, My God, why have you forsaken me.”  Plus they’ve added to the mix the Apostle’s Creed assertion that Jesus “descended into hell.”  The result is a huge misunderstanding.

It goes something like this.  The sin of the human race called down the punishment not only of physical death and suffering but also spiritual death, total separation from God which is what hell is all about.  Jesus bore this punishment in our place.  This means that he took our sins upon himself to the point that he actually became sinful and abhorrent to the Father.  He was thus truly abandoned by God on the cross and spent three days in hell, with the rest of the damned.

Let’s unravel this wrongheaded idea.  Elsewhere I’ve discussed the true significance of “My God, My God, why have you forsaken me.”   In this post, we need to clear up the other two misunderstandings.  First, there is 2 Cor 5:21.  In Hebrew, the same word means both “sin” and “sin offering,” What Paul is really saying is not that Jesus became sinful, but that he became a sin offering.

This kind of sacrifice was understood as compensation or restitution to God to make up for offending him through sin.  Honor and glory that God deserved had been withheld from Him; in the sin offering, perfect, costly animals, the most valuable possessions of the typical Israelite, were paid back to God in reparation and atonement.

The Passover Lamb had to be perfect, without blemish, and his bones could not be broken (that’s why Jesus legs were not broken on the cross like the legs of the two thieves, John 19: 32-37).  Jesus did not become sinful; he was the Lamb of God who took away the sins of the world by canceling them out through a sacrifice of overwhelming value.  His self-offering was an extravagant gift.  It consisted of all the love, humility, and obedience that centuries of human beings owed to God but had unjustly withheld from him.

The Father is not a blood-thirsty tyrant whose wrath is appeased by the suffering of Jesus.  He is the loving Father in the story of the Prodigal Son who respects his son’s freedom too much to force him to stay, or to send a posse after him once his sins led him to the brink of despair. 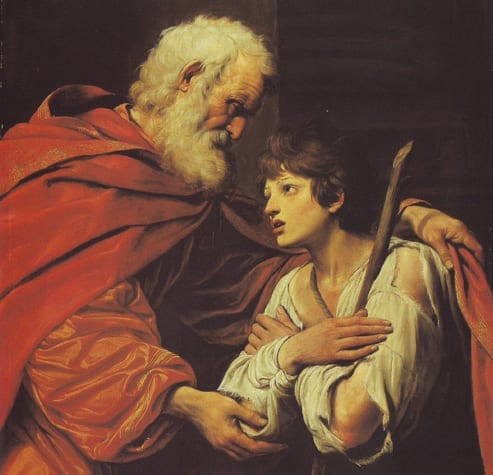 The Prodigal Son walked away in arrogance.  He would himself have to travel the road back in humility.

Adam, Eve and all of us walked away in pride.  We, their sons and daughters, would have to walk back in humility.  Trouble was, we couldn’t, so deeply had we been wounded by sin.  So God became man and walked the road for us, though it turned out to be the way of the cross.

Perfect humility.  Perfect love.  Perfect suffering.  Relentless and undeterred by every conceivable stumbling block and snare that hell could put in its way.  That is what redeemed us and paid the debt of our sins.

He Descended Into Hell

But what about the phrase in the Apostle’s Creed “he descended into hell?”  The word used for hell means not the inferno of the damned (Gehenna), but the abode of the dead known as Sheol, Hades, or Limbo.  The meaning of this is simple– he really experienced the separation of his soul from his body.  It was no drill.  He really died.  For us.  For me.  It was love to the bitter end.

The early Church had a further insight into this mystery that is still preserved and extolled by the Eastern Christian Churches to this day.  The Lord arrives at Hades’ door to tear it down and to liberate its occupants.  He here fulfills his own saying in Mark 3:27 — he comes to break into the strong man’s house and plunder it, trampling down death by death and leading those held captive by death to eternal life.

So Jesus is the conquering hero, not a passive scapegoat.  His free gift of unconquerable love is what makes atonement for our sins.  In him, broken humanity that had walked away from God walks back to Him in perfect humility.  And the Father rushes out to meet him in love, clothing him (and us) with the resurrection.

The passion, then, is all about love.  For God so loved the world that he sent his only Son who would lay down his life for not only his friends, but even for his enemies (John 3:16).

Banner/featured image The Return of the Prodigal Son by Pompeo Batoni. Public domain.