An explanation of the movement known as the charismatic renewal and the experience called “the baptism of the Holy Spirit” by a theologian who has participated in the Pentecostal movement for over 40 years.

On the eve of Pentecost 2014, Pope Francis attended a conference in an Italian stadium with 50,000 Catholics who appeared every bit as excited as the spectators who swarmed the world cup venue a few weeks later.

The timing of the conference was no accident, for these Catholics are participants in the charismatic renewal, a movement especially devoted to the Holy Spirit and the gifts that he poured out on that first Pentecost (Acts 2).

If we examine the account of what happened on Pentecost, we get an idea of what this modern-day movement is all about.  We see the apostles and other disciples who, though they had witnessed many miracles and even seen the risen Lord, were still timid and confused about what Jesus had really come to do (see Acts 1:6).

Before he ascended, the Lord told them that would receive power when the Holy Spirit fell upon them and that they would become his witnesses.

Nine days later, when they were gathered together, they found out what he meant.  We all know the story of the sound of the mighty wind and the appearance of tongues of fire (Acts 2).  The most important thing, however, is the difference made by the Spirit’s coming: for the first time, we see them joyful, fearlessly preaching of the gospel in the tongues of all peoples.  The disciples emerged from the upper room so exuberant that some observers even mocked them, thinking they were drunk.  Three thousand of those who heard them, however, were so moved that they were baptized.

As we read the book of Acts and the epistles, we see further results of the Spirit’s power in the disciples – tongues, prophecy, healing, and other miracles, not least of which was the extraordinary affection the disciples had for one another (See I Cor. 12-14).  We also see a new understanding of the Old Testament Scriptures and how they predicted, prefigured, and prepared for what Jesus taught and accomplished.  John had baptized in water, but on Pentecost, the ascended Lord had baptized the disciples with the Holy Spirit.

Throughout the Church’s history, similar gifts and miracles have occasionally appeared in the lives of the saints.  But generally, most Christians do not expect these manifestations of the Spirit to be part of the normal experience of ordinary Christians.  In fact some Christian groups, such as the Baptists, developed the theory that these gifts of the Spirit were special equipment provided for the booster phase of Christianity and were no longer needed and therefore no longer to be expected.

This theory was actually proposed by one of the bishops on the floor of the Second Vatican Council.  But the idea was so vigorously shot down by other bishops that in the Council’s central document on the Church, Lumen Gentium, we read the exact opposite:  that the charisms of the Holy Spirit are forever poured out upon the faithful of every rank for the building up of the church.  The document goes on to say that all these charisms, whether humble or more extraordinary, ought to be received with thanksgiving for they are vitally important if the Church is to fulfill her mission (Lumen Gentium 12). 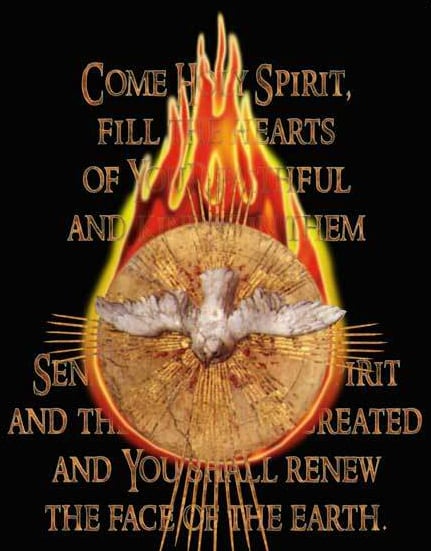 Baptism in the Spirit

Interestingly enough, John XXIII, in preparation for the Council, had distributed a prayer worldwide beseeching God for a “new Pentecost.”  And just three years after the close of the Council, a group of Catholic College students who met at Duquesne University for a retreat experienced many of the same things we see in the Pentecost account including joy, zeal, and prayer in tongues or unknown languages.

This experience of the “baptism of the Spirit” quickly spread like wildfire among Catholics of all ages and countries.  Such experiences had begun to erupt among Protestants earlier in the century, so it was natural that these Catholic “charismatics” learned much about this experience from Protestant Pentecostal sisters and brothers in Christ.

But from the start, prominent Catholic prelates and theologians participated in and advised the budding Catholic Pentecostal movement which came to be organized in various communities and prayer groups around the world: Leo-Josef Cardinal Suenens, one of the four Cardinal Moderators of Vatican II, and Avery Cardinal Dulles are two examples from the early days of the movement; Fr. Raniero Cantalamessa, the official preacher of the Papal Household under the last three popes, is an example today.

Not just a style

It would be a mistake to see the charismatic renewal merely as one spirituality among many in the Church, a style of worship that appeals to some and not to others.  The raising of hands, the “Hallelujahs,” “Amens,” and tambourines borrowed from Pentecostal Protestant culture–these you can take or leave as you like.  But such features don’t touch the essence of the movement.  The renewal is really about the recovery of the joy, power and the full complement of spiritual tools that were given to the Church on its birthday.  And this is something that we all should be excited about.

For more resources on Pentecost and the Holy Spirit, see the PENTECOST section of the Crossroads Initiative Library.

For brief PODCASTs on the Holy Spirit and his charisms, listen to THE PROMISE OF THE FATHER and PENTECOST POWER.

Marcellino D’Ambrosio, Ph.D. (aka “Dr. Italy”) experienced a profound transformation of life and change of direction due to his encounter with the Catholic Charismatic Renewal in his hometown of Providence, RI at age 16.  His participation in this Pentecostal movement ultimately led him to earn a doctorate in historical theology under the renowned Jesuit theologian, Avery Cardinal Dulles.