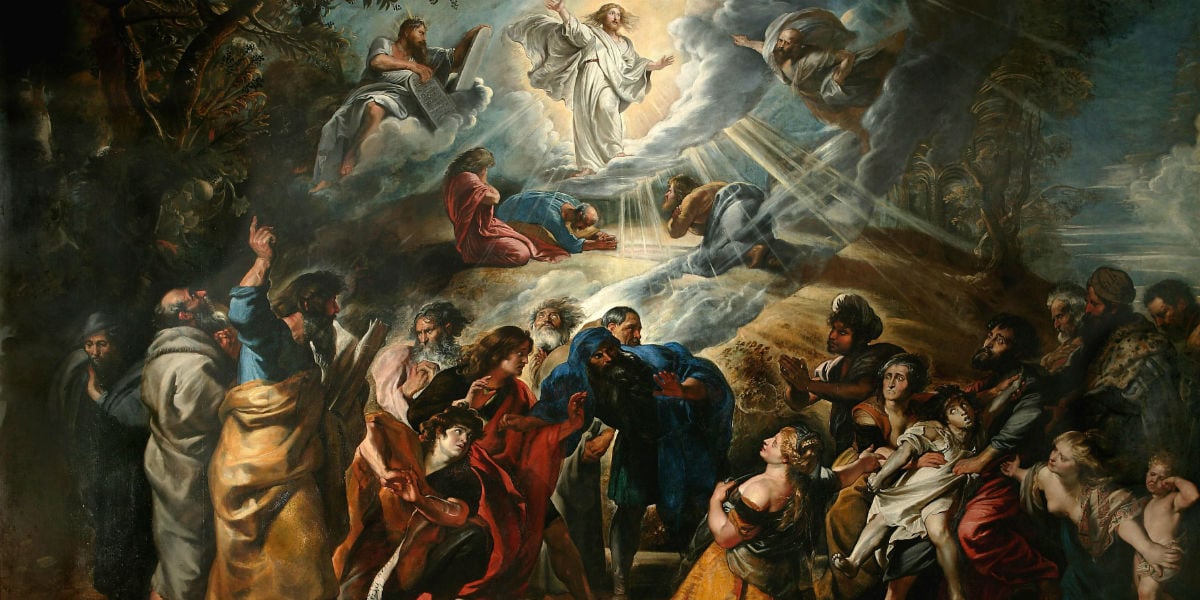 Hope in Hardship – Abraham & the Transfiguration

The call of Abraham (aka Abram) and the Transfiguration of Jesus are presented to us on the 2nd Sunday of Lent because they teach us about how to approach hardship and suffering with faith and hope. To LISTEN to this post read by Dr. Italy, click on the play arrow on the left directly below this paragraph.

Imagine: you are ten years past customary retirement age.  It’s time finally to kick back and relax.  You live in a great city where everything is at your fingertips – shopping opportunities, cultural events, all your relatives and lifelong friends.  Suddenly an unknown God appears and tells you to pack up, uproot your life, and march into an uncivilized wilderness.

Call of Abram, aka Abraham

This is what happens to a man named Abram as recounted in Genesis 12.  Abram lives in Mesopotamia, the cradle of civilization.  He’s 75 and he and his wife are not getting any younger.  The mysterious God who calls Abram later changes his name to Abraham.  Yet Abram does not even know the name of the God who calls and eventually renames him.

Wouldn’t you “discuss” this one a bit?  Not Abram.  Genesis reports no backtalk, no “yeah-buts.”  In a fit of understatement, Genesis simply says “Abram went as the Lord directed him.”

That’s faith.  The figure we all know as Abraham hears a command from a God he can’t see, believes that this God must know what He is doing, and begins a journey to he knows not where.  Keep in mind that Paul says “we walk by faith, not by sight.” (2 Cor 5:7).  That’s why Abraham is the great model of faith in the Old Testament.  For faith is not just about believing.  It’s about walking.

Obviously Abram’s choice to walk entailed great hardship.  What was the motivation that drove him to do it?

Simple.  There was something that God promised him that he desperately wanted.  Abram had a lot of things–wife, property, servants, and all the creature comforts afforded by his civilization.  Yet he lacked a son.  And for a Semite like Abram who had no belief in any sort of afterlife, a son was the only ticket to immortality.  A son would, presumably, go out and beget sons, thus keeping his father’s name and memory alive.  God promised not only descendants, but a progeny so numerous and great that all the communities of the earth would find blessing in Abram’s name.

So it was desire for future glory that enabled Abram to put up with the hardships entailed in answering the call.  This desire is called hope.

About 1900 years later, St. Paul writes these words to Timothy “bear your share of the hardship which the Gospel entails” (2 Tim 1:8).  To be a Christian during the first 300 years meant risking everything.  If the Romans caught you, it could mean torture or death or, if you got off easy, the confiscation of all of your possessions.  Why would people take this chance?

For the same reason Abram embraced hardship — hope.  The early Christians had been giving a vision and a promise of eternal glory.  They understood that no earthly good could compare with this everlasting joy and so were willing to suffer whatever loss necessary in order to secure it.   In this, they followed Jesus, their master, who “for the joy that was set before him endured the cross, despising the shame.”  (Hebrew 12:2.)

Aware of the trauma the apostles would shortly suffer through the horror of his crucifixion, the Lord Jesus gave their leaders a vision of hope to sustain them.  He went up on Mount Tabor and at last appeared as he really was.    In anticipation of his risen glory, the Light of the World allowed the dazzling white of his divinity to be revealed.

The Law and the Prophets bore witness to Him through Moses and Elijah.  The Father’s voice boomed the affirmation that this was his beloved son.  The Holy Spirit was manifested as the shekinah cloud of glory which had led the Israelites on their desert journey.  This transfiguration is a scene that proclaims the whole gospel, the Good News of a glorious life, won by the Savior, that lasts forever.

But the experience itself did not last forever.  It was not given to them so they could erect tents and stay there.

There was still walking to do.  The path called the Via Dolorosa lay before Him and before them as well.  The experience called the Transfiguration was to show them that this way of the cross was not a road to death but through death to a life that makes even death seem but a trifle.

To hear more on this subject, listen to Dr. Italy’s Podcast TRANSFIGURATION ON MOUNT TABOR.

For more resources for making this Lent your best ever, visit the 40 DAYS OF LENT Section of the Crossorads Initiative Library.

Banner/featured image is a painting of the Transfiguration of Christ by Peter Paul Rubens (dated 1605). Public domain.