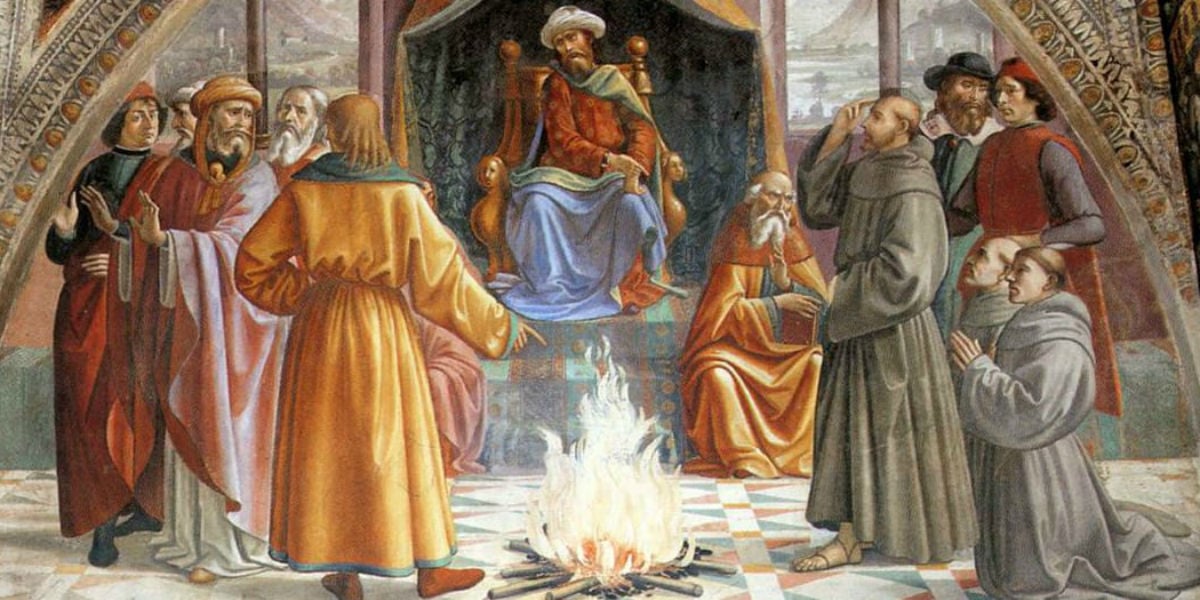 Jesus calls us to have faith at least the size of a mustard seed.  He also constantly addresses his disciples with this command: Be not afraid!  The story of St. Francis of Assisi and the Sultan shows us how to leave behind fear and grow in faith.

We all admire the heroes of faith like St. Francis (feast day, October 4). Absolutely nothing stopped him in his pursuit of God’s glory.

When, during the Crusades, he was captured by the Saracens, St. Francis challenged the imams to a duel to prove which was the true religion. “Light a bonfire,” Francis reportedly said to the Sultan, “and have your imam enter the fire along with me. Whoever emerges from the flames unhurt, his God is the true God.”

The Sultan thought it was a good idea. His imam did not. But from that moment on, the Sultan gave Francis and his friars safe passage passes to travel anywhere in Muslim territories unhindered so much was he moved by Francis’ faith.

So how about us? We identify more with the apostles’ request in Luke’s gospel. “Lord, increase our faith! (Luke 17:5).

You think the Lord would comfort the disciples when they made this request. “There, there, now. Don’t feel too bad about yourselves. Believing is hard!”

But that’s not how he handled it. His answer appears even a bit harsh: “If your faith was even the size of a mustard seed, you could say to this sycamore tree ‘be rooted up and planted in the sea,’ and it would obey you.”

Jesus sharpest rebukes, throughout Scripture, are in response to unbelief. And his most repeated command in the Gospels is “do not be afraid” which is better translated “stop fearing!”

Why can Jesus be so emphatic about faith and fear? Is it really our fault if we feel shaky inside before the Goliaths in our lives?

No, feeling shaky is not our fault. Feelings cannot be commanded. But faith is not a feeling. And the fear that Jesus rebukes is not a feeling. From the biblical accounts of the agony of the Garden, the Lord trembled with fear and dread at the ordeal that was soon to begin. But notice how he responded. He did not flee over the top of the Mount of Olives and disappear in the wilderness of Judea. He stood his ground as darkness approached.

Mustard Seed Faith as a Virtue

The Church teaches that faith is one of the theological virtues. And a virtue, says St. Thomas Aquinas, is a habit, a power or capacity that gets stronger when it is exercised and atrophies when it is not. So faith is like a spiritual muscle. We were all born with muscles. Some people choose to develop them; others do not. The way you develop them is to exercise them regularly and to do so against ever increasing resistance. More weight on the bar may mean pain and strain, but it ultimately leads to stronger muscles.

In our new birth from above, through baptism, we are all given the gift of supernatural faith.  At the time it is given, it is small and undeveloped, like a mustard seed.  Some Christians choose to develop it and some do not.

You must nourish and water it, like a seed.  You must exercise it, like a muscle.  You can do both by making acts of faith both in prayer and in action. Before each Mass, I try to make an act of faith in the Lord’s true presence in his people, in his ordained minister, in the Word of God, and most especially in the sacrament of his precious body and blood. When faced with trials, I try to get a hold of my dismay and fear, and make an act of faith in God who has always brought me through troubled waters. When faced with intimidating problems, I try to walk forward despite the feeling that I may not do as well as David did facing his Goliath.

No Pain, No Gain

The only way faith grows is to be challenged. So it is OK to pray for an increase of faith. But if you ask for faith, know that this means giving the Lord permission to put more weight on the bar. When he does, you’ve got to be willing to take a deep breath and lift. For, as St. Paul says, “God did not give us a spirit of timidity, but a spirit of power and love and self-control (2 Timothy 1:8).”

For a 14 minute PODCAST ON ST. FRANCIS OF ASSISI, listen to St. Francis of Assisi, Saint & Legend

For more on growing your faith, see the DISCIPLESHIP SECTION of the Crossroads Initiative Library.

Banner/featured image The Trial by Fire, Saint Francis before the Sultan of Egypt by Domenico Ghirlandaio. Public domain.