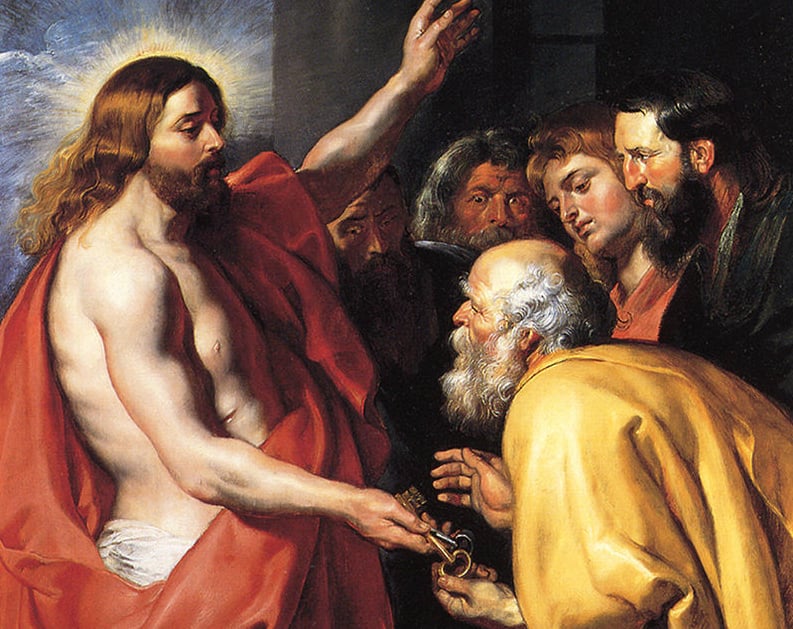 Papal Primer- overview of the Papacy

But one thing that non-Catholics and Catholics often have in common is a great misunderstanding of this ancient institution. What is the true job description of the Pope and what’s the origin and nature of papal authority?

Pope as Papa of a Family

Primarily, the Church is a community of disciples. In the New Testament, Christians are most frequently referred to as the brothers and sisters. So this community is a spiritual family. No wonder, then, why its worldwide leader is called “Holy Father.” In fact the word Pope is just an English translation of “Papa.”  Papal. then, means fatherly.

Name change from Simon to Peter

The best way to get a handle on papal primacy and the role of the Pope is to go back to the gospels. Jesus had numerous disciples, including Mary Magdalene, Lazarus, and many others. But from these he chose twelve to whom he entrusted special responsibility. He gave them power to sanctify through the sacraments which they were to administer (John 20:21, Luke 22:19, etc), the authority to teach what they’d received from him (Matthew 28:20), and power to govern the life of the Church (Matt 18:18).

Then from their number he chose one whose name he changed from Simon to Cephas or Peter, meaning “Rock” (Mat 16: 18). This should tip us off right away of the unique role of this apostle, for this is the only instance recorded in the four gospels of a name change initiated by Jesus. When God changes someone’s name in the Old Testament, its always indicative of a special role in God’s unfolding plan (e.g. Abram to Abraham).

Nearly every book of the New Testament notes the special role of this apostle, even if the book is written by another apostolic hero. Out of respect, the Beloved Disciple allows Peter to enter the empty tomb first (Jn 20:5-6) making Peter the first official, apostolic witness of the resurrection. Paul, the apostle “born out of normal course,” feels no obligation to spend time with any of the apostles except Peter (Gal 1:18). When it is time to proclaim the resurrection to the people of Jerusalem, it is Peter who is the apostles’ spokesman. Peter’s role is so preeminent that Acts even speaks of Peter and “the Eleven” (Acts 2:14).

This does not mean that Peter was naturally stronger than the others. All four gospels tell the story of his denial as a perpetual reminder of his inability to live up to his name by his own power. It is only after the Spirit is poured out at Pentecost (Acts 2) that we see him able to fulfill his role. The Lord actually allowed him to experience his own weakness, predicted his fall and commanded him, once he’d been converted and empowered by the Spirit, to strengthen the faith of his brother apostles (Lk 22:32).

Peter and the other apostles held fast to their profession of faith, in many cases witnessing to it by their blood. Though their role as eyewitnesses to the Lord’s resurrection was unrepeatable, their ministry of sanctification, teaching, and leading the community of disciples had to carried on by others of their choosing, usually called “bishops” in the New Testament. These bishops needed a visible center, head and spokesman who would continue the role of Peter in the Church. Since Peter gave his life for Christ in Rome, the bishop of the Roman Church was seen as the successor of Peter, the “Father” not only of the Christians in the Imperial city, but everywhere.

But what about this hard-to-take Catholic doctrine that the Pope is Infallible? Does this mean that a man, once elected to the Chair of Peter, can never again be wrong about anything?

Hardly. Let’s go back to the day Simon got his name-change. The Lord had asked the apostles a pointed question: Who do you say that I am? Peter answered “you are the Christ, son of the living God.” Jesus made clear that this answer did not proceed from Simon’s own cleverness or theological acumen. No, it was revealed by Jesus’ Father in heaven. Special divine assistance had enabled this apostle to profess the truth about Jesus.Then comes the name change and Jesus giving him the famous “keys of the kingdom of heaven” (see Is 22:22).Plus Jesus mentions that the jaws of death shall not prevail against the Church founded on this weak man called “Rock.”

If you think about it, the jaws of death would prevail over the Church if Christ’s followers could not resolve confusion over the truth about Jesus and his way of salvation. So Jesus has given a charism of truth to the successor of the apostles in general and the successor of Peter in particular. He has done this so that the Church can always be sure of what has been revealed by God for the sake of our salvation. This charism of infallibility has been most often been expressed in solemn fashion by the bishops and the Pope together through an ecumenical council. But ecumenical councils are few and far between, happening on average only about every 100 years.

So that the Church is always able to be sure what has been revealed by God, the Holy Spirit gives the same assistance to Peter’s successor as he gave to Peter on that day at Caesarea Phillipi. So, when the Pope, in his capacity as the successor of Peter (ex cathedra), solemnly declares something relative to faith (what we are to believe) or morals (how we are to live) as having been revealed by God, he teaches infallibly. Catholics are obliged to believe such papal teaching with divine faith, since the teaching is guaranteed to have its source in God and His revelation, not in human opinion.

The Pope can also make definitive judgments about matters related to faith and morals, such as what is necessary for the valid celebration of the sacraments, or whether the witness of Scripture and Tradition allow for women to be ordained to the priesthood. Once the Successor of Peter makes such a judgment, Catholics are no longer free to debate the matter. Case closed.

But it has been rare that the Pope has engaged his authority so fully as to define dogmas infallibly. And his definitive judgments, though more frequent, are still few and far between. So what about the rest of his teaching?Are we free to take it or leave it?

Not at all. Peter was commanded three times by Jesus to express his love for Christ by feeding Christ’s sheep (John 21). So on a daily basis, the Holy Father feeds the family through teaching expressed in a variety of ways: homilies, talks to pilgrims, prelates, and heads of states, apostolic letters and constitutions, encyclicals, and other sorts of documents. Catholics must receive such ordinary papal teaching with the “religious submission of intellect and will” (Vatican II, Lumen Gentium 25). This means that we always approach his teaching with gratitude and respect, doing our best to open our minds to it and allow our views and lives to be shaped by it.

Papacy as a Compass

The Pope’s teaching office has indeed been a reliable compass to the Barque of Peter as it makes its way through the troubled waters of history. In the course of the centuries, as prominent Christian leaders of various ancient sees succumbed to heresy under pressure of wayward emperors, kings, and scholars, the Pope has never failed to continue to profess the faith handed on by the apostles.  In our lifetime, we’ve been blessed to witness  the Pontificate of St. John Paul II, one of the greatest teachers ever to occupy the Chair of Peter.

Let’s give thanks to God for the gift of the papacy and show our gratitude by opening this gift and making use of it in our lives.

For more on the the role of the Pope and papal teaching, visit the PAPACY SECTION of the Crossroads Initiative Library.