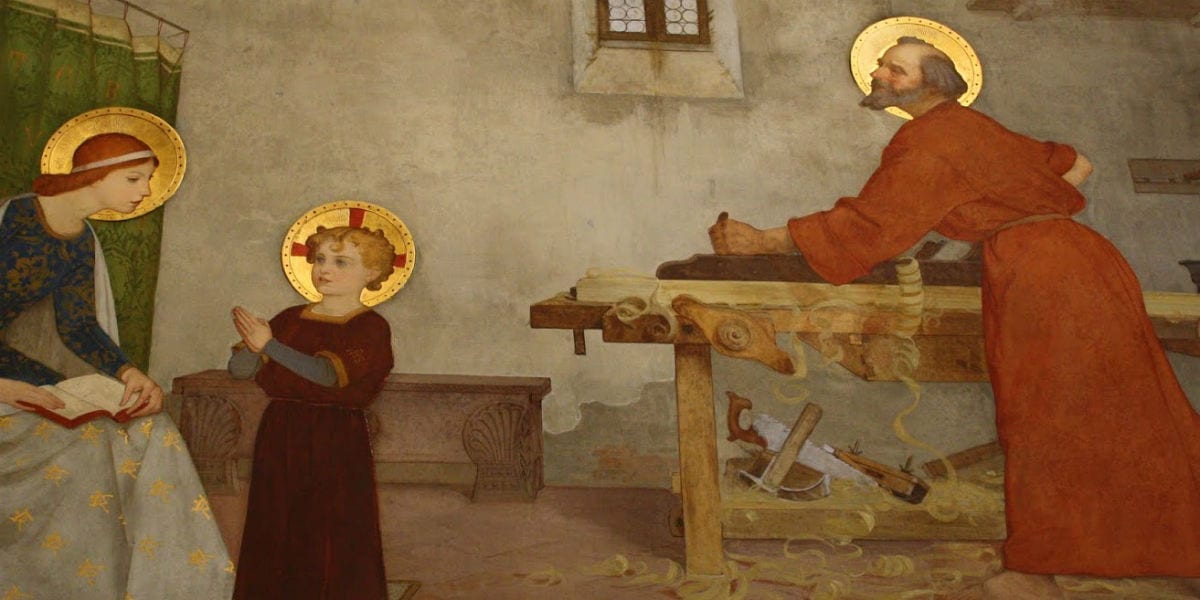 Saint Joseph always appears in Manger scenes during Advent and Christmas time and even has a special Solemnity or Feast in his honor, St. Joseph’s Day, March 19.  But he is so often neglected that St. John Paul II decided to write a special teaching about his role as foster-father of Jesus.  This essay makes a case that St. Joseph teaches us some crucial things about the nature of faith that we can’t afford to forget.

In the drama of the incarnation, Jesus is, of course, the star. That’s the way it is at every birth. All eyes are on the baby. The co-star, though, is definitely mom. Without her love and labor, the event could not have happened. In this case, without mom’s faith it couldn’t have happened either.  According to Luke’s Gospel, an angel brought her stunning news. She believed the unbelievable and said “let it be.”

But there is a best supporting actor in the drama as well. True, Joseph was not the biological father. But the messiah had to be of David’s royal line. In ancient Israel, a child’s clan was determined by that of his father. So it was Joseph who legally bound Jesus to the house of David. It was because of Joseph that the family had to go to Bethlehem for the census, that the prophecy might be fulfilled.

God carefully selected the woman who would be the mother of his Son. But he must have been equally careful in his selection of the foster-father. For genes are not the only thing parents impart to their children. Jesus, in his humanity, had to grow in wisdom, age, and grace (Luke 2:52). Joseph must have had responsibility for a good deal of this growth. It was Joseph who was Jesus’ male role-model. From Joseph Jesus learned many things, including the trade that he would practice for some twenty years.

But there are even more important things that Jesus learned from Joseph. For Joseph was a just man, an honest man, a courageous man, a man of integrity.

His betrothed was pregnant but not by him. Imagine the shame, the hurt, and the anger that he must have experienced assuming what anyone would assume in such a situation. His integrity would not allow him to marry an adulteress and pretend the child was his. Neither would he expose the woman he loved to shame and punishment. He did not procrastinate or waffle. He made the difficult decision to divorce Mary quietly.

But then came the messenger. In Luke’s Gospel, there was an angelic annunciation to Mary. In the first chapter of Matthew, we learn that Joseph gets one too. He was named after the greatest dreamer of the Old Testament. Maybe that’s why his annunciation came in a dream.

Faith in the Inconceivable

Mary’s primary virtue is her faith. When told the unbelievable, she said fiat – let it be.   Joseph’s claim to fame is also his faith. He too was told the inconceivable and yet dared to believe.

Note, though, that his response of faith entailed taking action–he changed his plans, received Mary into his home, and accepted responsibility for this special child. Keep this in mind, though. Mary needed no revelation to be sure this was a virginal conception. All Joseph had to go by was what he received from an angel . . . in a dream!

Do you think he may have been tempted at some point to second guess this experience? Especially when things did not go smoothly. After all, when a plan is from God, are not doors supposed to open? Yet when they arrived in Bethlehem, the door of the inn was slammed shut in Joseph’s face. If this were God’s child, wouldn’t God provide a room? And if this were really God’s son, wouldn’t God have turned back Herod’s hit men?

Then the angel shows up again in another dream: “Flee to Egypt with Mary and the baby.”

Another journey on foot.  This time to a foreign land 250 miles away.  Wasn’t the 90 mile walk to Bethlehem with a pregnant woman enough? If this was God’s doing, shouldn’t things be going more smoothly than this?

Joseph may or may not have thought these things. I would have. The point is, Joseph believed and acted. And when the angel came a third time and told him to make the long trek back to Nazareth, he acted again.

Joseph certainly did a lot of walking. From Nazareth to Bethlehem to Egypt and back again. Paul said we walk by faith, not by sight (2 Cor 5:7). Joseph is a model of faith because he keeps walking, even in the dark.

For a 14 minute Podcast on St. Joseph, listen to ST. JOSEPH, MODEL OF FAITH.