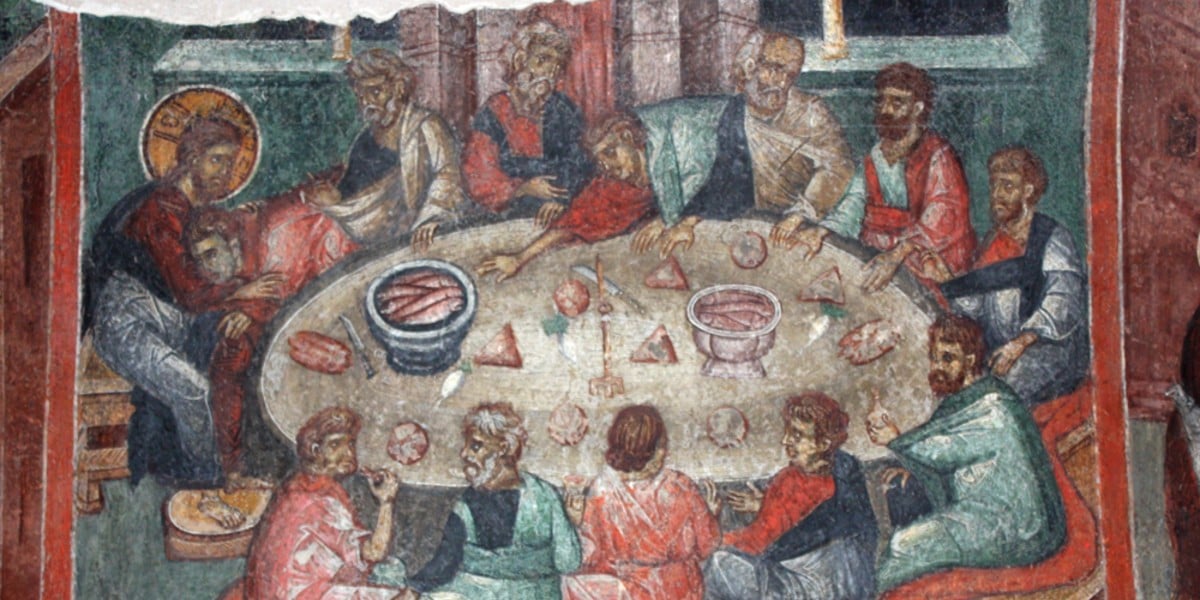 Justin here describes the way the Sunday Eucharist was celebrated in Rome about 150 AD about 50-60 years after the last New Testament books.  It shows that: 1) the Eucharist was interpreted in a very realistic way in the early church, the bread and wine becoming the flesh and blood of Jesus Christ; 2) it was the principal, weekly worship celebration of the Christian community; 3) it took place on Sunday, not on Saturday, the Jewish Sabbath; and 4) the meaning of the Eucharist and manner of its celebration was handed down by the apostles.

No one may share the Eucharist with us unless he believes that what we teach is true, unless he is washed in the regenerating waters of baptism for the remission of his sins, and unless he lives in accordance with the principles given us by Christ.

The Lord gave this command to them alone. Ever since then we have constantly reminded one another of these things. The rich among us help the poor and we are always united. For all that we receive we praise the Creator of the universe through his Son Jesus Christ and through the Holy Spirit.

On Sunday we have a common assembly of all our members, whether they live in the city or the outlying districts. The recollections of the apostles or the writings of the prophets are read, as long as there is time. When the reader has finished, the president of the assembly speaks to us; he urges everyone to imitate the examples of virtue we have heard in the readings. Then we all stand up together and pray.

On the conclusion of our prayer, bread and wine and water are brought forward. The president offers prayers and gives thanks to the best of his ability, and the people give assent by saying, “Amen.” The eucharist is distributed, everyone present communicates, and the deacons take it to those who are absent.

The wealthy, if they wish, may make a contribution, and they themselves decide the amount. The collection is placed in the custody of the president, who uses it to help the orphans and widows and all who for any reason are in distress, whether because they are sick, in prison, or away from home. In a word, he takes care of all who are in need.

We hold our common assembly on Sunday because it is the first day of the week, the day on which God put darkness and chaos to flight and created the world, and because on that same day our savior Jesus Christ rose from the dead. For he was crucified on Friday and on Sunday he appeared to his apostles and disciples and taught them the things that we have passed on for your consideration.

For a brief video on the author, see Dr. Italy’s lecture on THE CONTRIBUTION OF JUSTIN MARTYR TO CHRISTIAN THOUGHT.

This famous passage from the First Apology of St. Justin Martyr (Cap. 66-67: PG 6, 427-431) tells us what the Sunday eucharist was like in the early Church and how it was understood – the bread and wine becoming the flesh and blood of Jesus Christ.  It is used in the Roman Office of Readings for the third Sunday of Easter with the accompanying biblical reading of Revelation 6:1-17).

St. Justin Martyr was born around 120 AD in Palestine into a pagan Gentile family. He studied the wisdom of Plato, Aristotle, and other great Greek thinkers and became a professional philosopher.

One day, while reading philosophy by the seashore, he was noticed by an old man who took the time to strike up a conversation about philosophy and religion. The elderly gentleman was a Christian and witnessed to Justin on how Jesus fulfilled all the prophecies in the Jewish holy books.

As Justin investigated the matter, his realized that he had found the wisdom that he had been searching for all of his life. Justin then became a Christian teacher and lived for a while in Ephesus, after which he moved to Rome, the Imperial Capital. He wrote and spoke openly about Christ, addressing two “apologies” or defenses of the Christian faith to the emperor himself.

Justin became one of the most influential teachers of the 2nd century and has been regarded ever since as one of the Fathers of the Church. Though contemporary writers tell us that he wrote extensively on many topics, only his two apologies and his Dialogue with Trypo, the Jew, survive today.

A rival philosopher turned Justin in to the authorities for his Christian faith, and Justin was martyred around the year 165 AD. An eyewitness account of his interrogation and martyrdom at the hands of the Roman authorities has been preserved for us and is read each year in the Church’s office of Readings on June 1, St. Justin’s feast day (Bio by Dr. Italy).  For more information on Justin Martyr and his teaching, see When the Church Was Young: Voices of the Early Fathers.