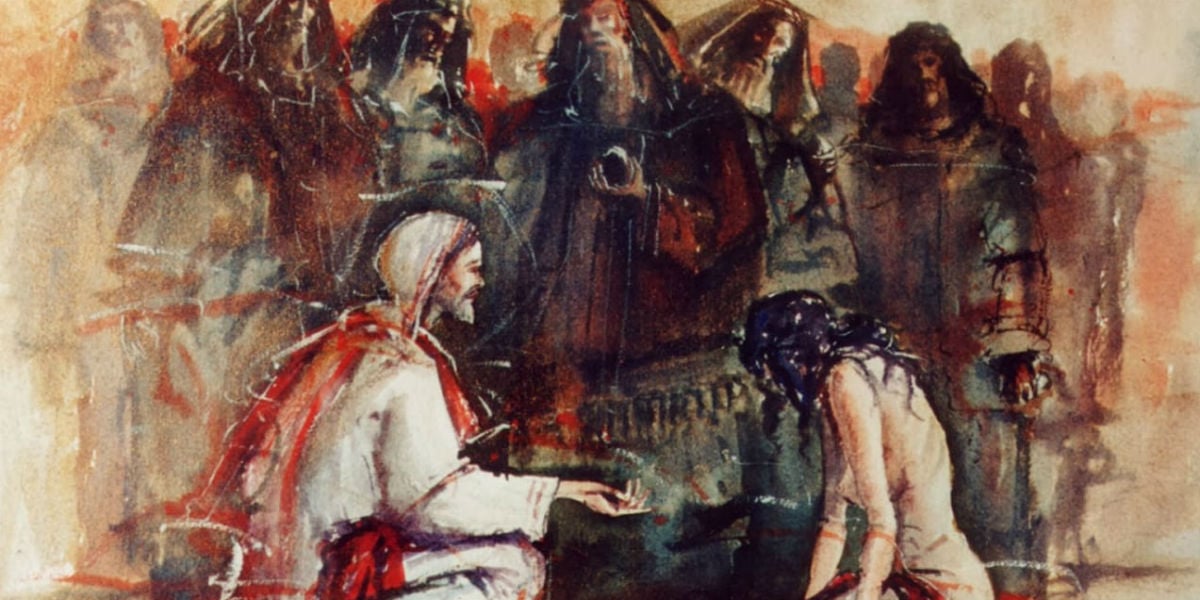 The Adulterous Woman and Costly Grace

The adulterous woman to whom Jesus said “neither do I condemn you” was the recipient of the free gift of a grace that was costly, not cheap.  She was called to leave behind the sin of adultery.  And the pardon of the adulteress cost Jesus his life.  For the 5th Sunday of Lent, cycle C.

It really looked like the end of the road for her.  Caught in the act of adultery, a capital crime, her fate lay in the hands of an angry mob.  Desiring to kill two birds with one stone, the Pharisees decided to use this adulterous woman as a political pawn, and so dragged her to Jesus.

The Woman Caught in Adultery

But they badly miscalculated.  He replied to their tough question with a tougher question.  They planned to embarrass him.  But he embarrassed them. Reduced to silence, they were forced to admit the hypocrisy of their self-righteousness.  So they walked away and left her standing there before the only one who was truly righteous.

But Righteousness did not condemn.  He forgave.

Now that’s different!  It really hadn’t been seen ever before, at least not like this.  “See I am doing something new!  Now it springs forth, do you not perceive it?”  (v. 19 of Isaiah 43, but please, read the whole chapter!).

A New Start for the Adulteress

Jesus offered this anonymous adulteress a brand new start.  She could have been Mary Magdalene, as in Mel’ Gibson’s film.  Or she could have been anyone.  We are all guilty of adultery, at least in sense that the book of Hosea uses the word.  God is the spouse who has given us everything and deserves our exclusive loyalty.  We should worship the ground he walks on.  But instead we’ve cheated on him, looking for thrills from other lovers who have not delivered what they promised.  Given that he is the source of Life itself, rejecting Him means choosing death.

It seems so easy for Jesus to say to the adulteress (and to all of us) “neither do I condemn you.”  With those words, he saved her from death and gave her a new lease on life.  So what did it cost her?  “Go and sin no more” is her program.  She must change her life.

But what did it cost Him?  Everything.  He was required not just to change his life, but to lose it.

In Mel Gibson’s “The Passion of the Christ,” one of the most poignant scenes is when mother Mary rushes to be with Jesus as he collapses under the weight of the cross.  In that agonizing moment, he looks up at her and says, “See, I make all things new!” (Rev. 21:5)

A famous German theologian murdered by the Nazis, Dietrich Bonhoeffer, pointed out the difference between “cheap grace” and “costly grace.”  Grace is free.  It is the absolutely unmerited gift of pardon and loving friendship extended to us by God in a way that transforms us and makes all things new.  But such grace is not cheap.  It was paid for by the suffering of God’s Son, suffering that he willingly embraced out of love for us.

Paul sees Grace as a Treasure

Paul needed this grace desperately.  He occupied a conspicuous place among the self-righteous, a member of the blood-thirsty crowd that stoned Stephen and would have stoned the adulterous woman.  When on the road to Damascus he realized who he was and what he deserved, he saw the grace offered to him as more precious than gold.  It was the pearl of great price.  In light of this treasure, all else appeared as trash (he actually uses a rather vulgar word for “compost” in Phil 3:8).

He was not satisfied to be a passive spectator.  Rather he wanted to share personally in Christ’s sufferings and so come to experience the exhilarating power of his resurrection, the love that is stronger than death.  He saw the heavenly finish line ahead and decided to go for the gold.

That grace is available to you.  The question is, how precious do you view it?  What value do you place on it?  It is offered to you daily through the Eucharist, the Word of God, and prayer.  Are you too busy to fit these into your schedule?   How much effort do you make to grasp the prize?  Are you sprinting, walking, or just moping?

Actions speak louder than words.  Let’s examine where we spend our time, money and energy.  That will tell us what it is that we really value most.

This article features the story of the adulterous woman to whom Jesus said “neither do I condemn you; go and sin no more.”   It is a reflection on the gospel on the woman caught in adultery that appears in the lectionary on the 5th Sunday in Lent, cycle C (Isaiah 43:16-21; Psalm 126:1-6; Philippians 3:8-12; John 8:1-11).  The pardon of the adulteress shows the difference between cheap grace and costly grace.

These raising of Lazarus is the gospel at Masses that include the third scrutiny in RCIA occurring on the 5th Sunday in Lent each year, including year C.  For a commentary on this story, see The Raising of Lazarus – death and resurrection.