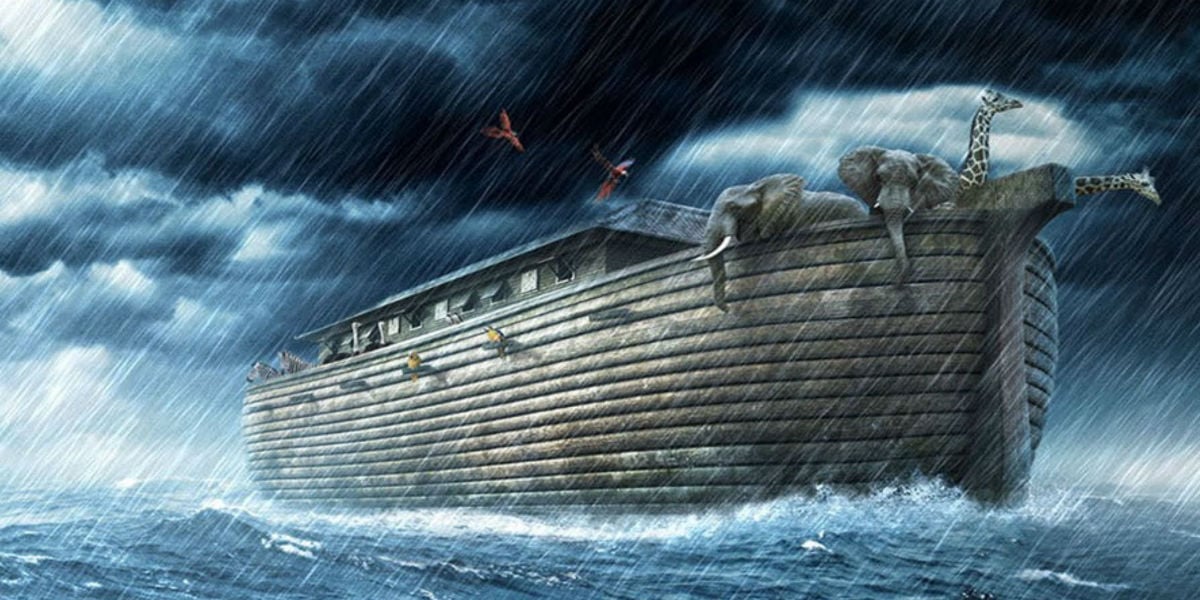 Lent, Noah’s Ark, and Baptism – First Sunday of Lent B

We begin the forty days of Lent with the memory of a previous 40 days when sin was cleansed from the face of the earth.  This occurred through a flood which spared only 8 people – Noah & his companions on the ark.  This gives us a hint about the meaning & purpose of Lent and its mysterious link to baptism.  For the first Sunday of Lent, cycle B.

In today’s fuzzy moral landscape, it is quite unpopular to even speak of sin, never mind condemn it. It’s even more politically incorrect to talk about God taking stern action against sin and those who promote it.

But that is exactly what the story of Noah and the flood is all about. The great flood is a testament to God’s hatred of sin and his determination to wipe it from the face of the earth.

He of course offers a way to escape the waters of destruction.  He instructs Noah to build an ark which carries to safety eight people and pairs of every animal. With these, he provides the earth and the human race with a new beginning. As a sign of God’s covenant of friendship with the newly recreated world, he places a rainbow in the sky.

From the beginning, Christians have seen in this story a hint of a greater work of God that would come later. The first flood swept away the evil from the surface of the earth, but not from the hearts of the ark’s passengers. The Red Sea closing in upon Pharaoh and his armies had much the same limitation–it did not cleanse the soul of Israel.

So an even greater act of salvation was needed, one that was more radical, that penetrated to the very “root” of evil. God himself would enter into our world in the form of a man, and engage in hand to hand combat with the father of lies.

First Jesus himself is immersed in the waters of the Jordan, a sign of the destruction of sin, though he himself has no sin. Next he goes into the wilderness to strike at sin’s dark lord.

The wrestling match is won by the Son.

This, however, is not the decisive battle. Mark is a gospel of few words and does not note what Luke (4;13) tells us: Satan left Jesus to await another opportunity.

That opportunity came later, brokered by Judas, Caiphas, and Pilate. On the cross, the sign of this New Covenant, Jesus decisively vanquished sin and its patron, letting loose from his own pierced side a stream that was more powerful than the ancient waters of Noah and Moses.

Through faith and immersion in this mighty water of baptism, sin can finally be scoured not just from the skin but from the heart.  Baptism puts to death not men, but the old humanity, separated from God and infected with the disease of disobedience.

The first Letter of Peter (3:20) points out something that it is easy to miss–there happened to be 8 persons in the ark.

Jesus rose from the dead the day after the sabbath which was of course the seventh day of the week. God had created the old world in six days and then rested on the seventh.  But now, in the resurrection of Jesus, God had performed the new creation on the eighth day.

For this reason, in the early Church, baptisms did not usually take place inside the main church sanctuary. Rather, separate smaller buildings called baptistries were erected next door. It is notable that they were generally octagonal- eight-sided. For baptism means burying the old man with Christ and emerging from the womb of the Church as a new creation, sharing in Christ’s resurrection on the eighth day.

It’s important to keep in mind that Lent is a time intimately linked with baptism. In the early Church, it was the season that catechumens prepared themselves through prayer and fasting for their paschal journey to the baptistry. The faithful prayed and fasted with them.

It was also the time that those who had soiled the white garments of their baptism through sin prepared for the sacrament of reconciliation during the sacred Triduum.

If we’re honest, all of us fall to some degree into this second category. Our baptismal garments could stand a good clearning.  So let us determine– through prayer, fasting, and giving–to intercede for the catechumens and candidates, and at the same time to scour compromise and luke-warmness from our own hearts.

Procrastination and excuses must be put to death. Now is the acceptable time, now the day of salvation.

When people think of Lent, Noah’s Ark is usually not the first thing to pop into their minds. But there is an essential connection — and it goes beyond 40 days and 40 nights.

For another take on the Temptation of Jesus in the Desert, read this POST BY DR ITALY.

For more great ideas for the Lenten Season, see the 40 DAYS OF LENT section of the Crossroads Initiative Library.

For a good summary of the biblical support for the Lenten Season, read Dave Armstrong’ post The Biblical Background for the Practice of Asceticism and the Season of Lent