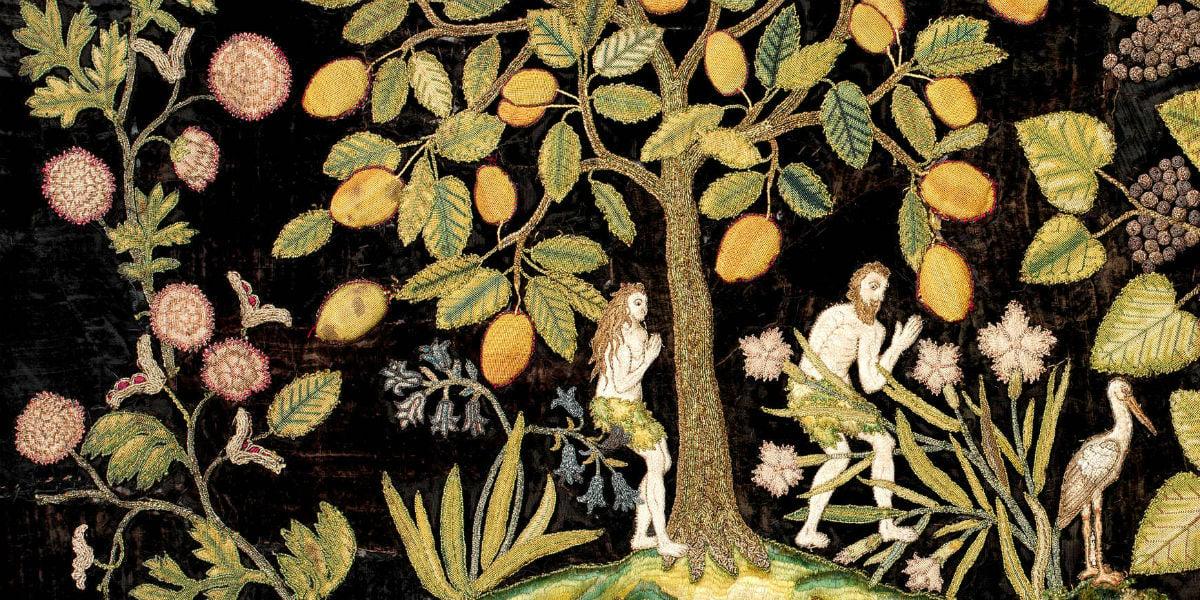 The Temptation of Jesus in the Desert is the gospel of the first Sunday of Lent.  The purple color of Lent symbolizes penance, but also royalty.   As we remember how the first Adam was tempted and failed his test, we rejoice that Christ the King, the New Adam, triumphed over the tempter.  We celebrate that we, sons and daughters of the same heavenly King, can also win the battle against temptation.  1st Sunday of Lent, cycles C and A.

As I crossed the great divide of puberty, I formed a vivid image of God.  He was a grumpy old man with a frown on his face.  Every time anyone tried to have a little fun, he’d shout “Thou shalt not!”

But to really live and not just exist, you had to do the daring, “sinful” things.  What the Bible calls “sin” is where the action is.

This is what I was taught in the movies I watched and the books I read.  It’s what I heard in the locker room and in the checkout line, from men and women, young and old.  Everybody appeared to accept this as an unquestioned matter of fact.

Behind this widespread perception lay a very successful propaganda campaign unparalleled in the history of humanity. In fact it goes back to the very beginnings of humanity.  To the Garden.

Think of it for a minute.  The triune God, completely sufficient in Himself and needing nothing, decides to create paradise out of chaos in an act of sheer generosity.  He creates creatures of all shapes and sizes, and sets, as caretakers of them all, a couple created in God’s own image and likeness, with intellect and will, freedom and responsibility.

The assigned activity of Adam and Eve is to love one another intimately, to walk daily with God in the cool of the evening, and simply enjoy Paradise.

Any duties?  Sort of.  They had to tend the garden, which was virtually maintenance-free since neither thorn nor thistle, drought nor Japanese beetle had as yet arrived on the scene.  And there was one more thing–to avoid eating the fruit of a particular tree, since it would kill them.  But how hard was that, given all the other luscious fruit available in the garden?

Then appears a slithering reptile who had given them absolutely nothing.  But now this tempter has the nerve to give Eve advice that constitutes the first temptation in history: “Did God say you’d die if you ate this fruit?  Nonsense!  He only said that because eating this fruit would make you his equal, and he can’t bear that.  You see, Eve, he created you to enslave you.  He wants to keep you under his foot.  He’s keeping the best for himself.  You listen to him and you’ll be missing out on real life.  You and Adam will be losers forever.”

Temptation as the Glamorization of Death

Thus began the deceptive advertising campaign that lasts till this day, the glamorization of death.

For that truly is what sin is about, and that’s why God says “thou shall not.” He is not a crabby prude, but a loving Father.  He knows us better than we know ourselves and loves us better than we love ourselves.  So he does what every parent does.  “Don’t touch the stove, you’ll get burnt.”   “Don’t play at the top of the stairs–you’ll fall and break your neck.”

Our first parents believed the liar instead of the Father.  Falling for the temptation meant breaking their relationship with God and, at the same time, shattering the innocent intimacy they had with one another.  Next, their family fragmented as soon as it started with Cain killing Abel.  Thorns and thistles appeared, Paradise was lost, and death came into the world.

Lent begins with the memory of how Adam, the first head of the human family, buckled under the pressure of the lies.  But more importantly, we remember too, how Jesus Christ, the new Adam, went another round with the tempter in the desert and overcame temptation through the power of the Word of God.

Our task during these forty desert days of Lent is to examine our lives in light of God’s Word and see where we’ve allowed darkness to creep in, where we’ve taken the bait of the diabolical fisher of men.  It’s time, in the name of Christ, to use the sword of the spirit to cut through the tempter’s web of deception, to free ourselves from the net that holds us as prey, and make our way through the desert to the promised land of the Kingdom of God.

The Way: The Way of the Christian from Sherwood Fellows on Vimeo.

That is why Lent is called a joyful season of freedom.  The purple color of repentance is also the color of royalty–it’s the time to recognize our true identity in Christ, time to claim our true birthright as free sons and daughters of a loving Father who happens to be the Almighty King of the Universe.

For another take on the Temptation of Jesus in the Desert, read this Lenten post by DR ITALY.

For more great resources for the 1st Sunday in Lent, on the Temptation of Christ in the desert, and  for the Lenten Season in general , see the 40 DAYS OF LENT section of the Crossroads Initiative Library.

For a good summary of the biblical support for the Lenten Season, read Dave Armstrong’ post The Biblical Background for the Practice of Asceticism and the Season of Lent

Banner/featured image The Garden of Eden by an unknown artist. Public domain.