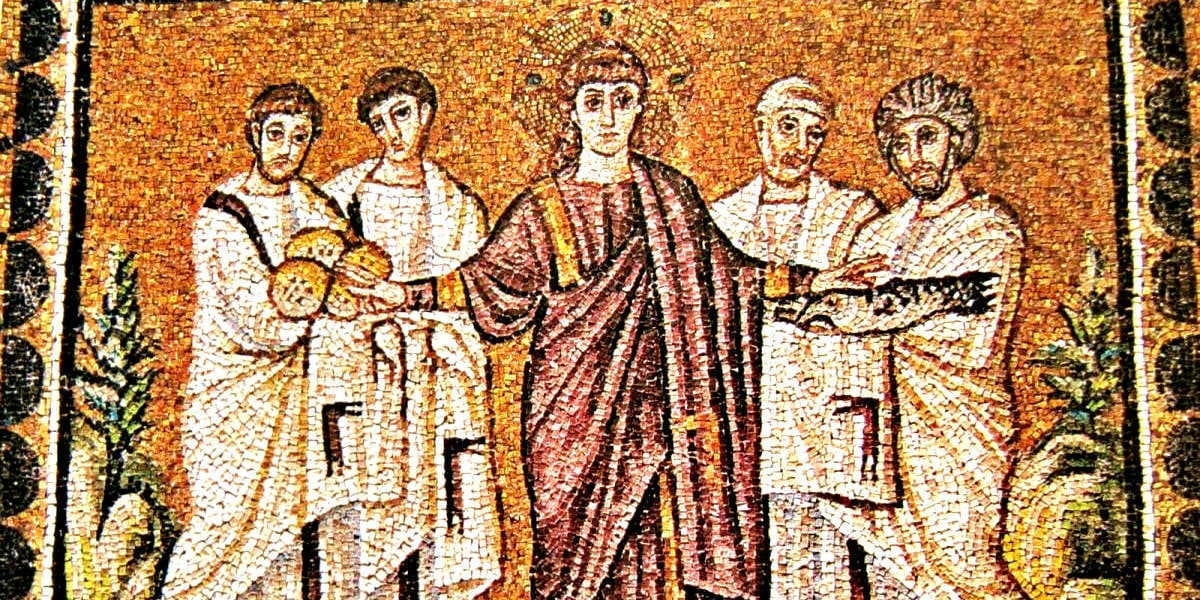 Multiplication & Transformation – The Principle behind the Loaves & Fish

The famous miracle of the multiplication of the loaves and fishes calls us to trust that when we offer the Lord our ordinary and scanty resources, he will work a wonder of transformation, just like he transforms the bread and wine of the Eucharist. To LISTEN to this post ready by Dr. Italy, click on the play arrow on the left, directly below this paragraph.  For the 18th Sunday in Ordinary Time, cycle B.

One of the most famous miracles of Jesus is the only one recorded in all four gospels–the multiplication of the loaves and fishes.

I once heard a homily that claimed what really happened is that bystanders took out food they were hiding under their cloaks and shared it. Jesus’ preaching inspired the melting of selfishness, and this was the true miracle according to this preacher.

My kids would call such preaching hopelessly lame!

Entrusting to God the Little we Have

And this hits upon the grain of truth contained in the lame interpretation we’ve just mentioned. Though this story is about truly supernatural, miraculous action, it is not about God creating something out of nothing. He says to the apostles “you give them something to eat yourselves.”

He had to be joking, they must have thought to themselves. They had nothing, or almost nothing. Just five loaves and two fish–scarcely enough to serve as an appetizer for themselves, never mind the crowd. But the apostles sheepishly complied when Jesus ordered that they surrender their scanty food supply. He blessed this meager offering and the miracle happened. It was not only enough, but after thousands had eaten their fill, there was more left over than what they’d started with in the first place.

It never ceases to amaze me at how much energy we put into making excuses. “I don’t even earn enough to feed my own family, how can I be expected to give?” “I haven’t studied the faith enough to be a religious education teacher.” “I trip over my words when I try to explain my faith–I’ll just evangelize through good example.”

Multiplication – Loaves, Fish & Everything else

Our financial resources, talents, and holiness are clearly inadequate to meet the needs of a hungry and confused world. But what else is new? This gospel commands us to offer these resources anyway, trusting that He will multiply them.

Who could have guessed how God would multiply the loaves and fishes offered by an Albanian nun named Teresa when she walked into the slums of Calcutta to minister to those dying in the streets? Imagine if she had said “No, Lord, this is beyond me.” Imagine if Peter had not reconsidered after saying “Leave me, Lord, for I am a sinful man” (Lk 5:8). Imagine if the apostles had saved the five loaves and fish for themselves instead of offering them to the crowd that wouldn’t have been satisfied with them anyway.

“But,” you may protest, “Isn’t this miracle story about the Eucharist?” Absolutely. In the Eucharist we bring the very ordinary work of our hands, bread and wine, and join to this the offering of our very ordinary lives. Through the invocation of the Spirit and the Word of God, this offering is transformed into the Body and Blood of Christ, the Bread of Life and the Cup of eternal salvation. We offer him the work of our hands and our broken humanity, and he transforms these things into perfect humanity and life-giving divinity. And with this he not only feeds us but empowers us to feed the whole world.

This transformation, this multiplication is a supernatural marvel that is the source of other marvels. In fact, if we were to unpack just a fraction more of the miraculous power contained in the Eucharist, we, the Church and the world would be forever different.

And that’s why Pope John Paul II proclaimed a special Year of the Eucharist in the last days of his pontificate–that in meditating more on this astounding gift, we would be prompted to quit holding back. Jesus has given all and asks for all in return. Not so he can take it away, but rather so that He can multiply it.

For more insight into this famous miracle of multiplication, read THE HIDDEN MEANING OF THE LOAVES AND FISH

For more on the eucharist in scripture and tradition, see the EUCHARIST SECTION of the Crossroads Initiative Library.

This post focuses on the miracle of the multiplication of the loaves and fishes as recorded by the gospel of Matthew.  It is a reflection upon the readings for the 18th Sunday in Ordinary Time, liturgical cycle A — Isaiah 55:1-3, Psalm 145, Romans 8:35-39; Matthew 14:13-21.  It is also appropriate as a reflection on the multiplication story in the other three gospels, notably the gospel of John (18th Sunday in Ordinary Time B)

Banner/featured image of a mosaic of the loaves and fishes by an unknown artist in an unknown church. Public domain.